Despite the inclement weather, a crowd of approximately 60 people gathered in Wolfe Tone Square in Bantry last Saturday to protest against the handover of billions of euro to Anglo bondholders. The hour long protest, following-on from the previous weeks demonstration in Dunmanway, was organised by West Cork Sinn Féin but was supported by people of various political persuasions and none. Passers-by gave their ‘thumbs-up’ and beeped their car horns to show their support as they read the many placards and banners on display.

The assembled crowd then walked from the square to the constituency office of Fine Gael TD Noel Harrington on High Street, where SF representative Paul Hayes read aloud a letter of protest calling for an end to the handing over of billions of taxpayers money to Anglo bondholders, and instead spend this money on vital public services and investing in a job strategy to get the half a million unemployed people back to work.

Sam Simpson of Bantry SF then put the letter through the letter box of the local deputy’s office, as it was closed at the time, and in thanking the crowd for their attendance, promised that this ‘people’s movement’ was only beginning and that it would build into something substantial locally and nationally. Plans are afoot to travel back to Bantry again on Friday evening, 3rd February, as Taoiseach Enda Kenny is expected to attend a function in The Westlodge Hotel. Various groups including the Save Our Small Schools, Save Our Ambulance Service, Anti-Septic Tank and Household Charge campaigners are also expected to descend on Bantry that evening, from 8pm, to show their opposition to the cuts and stealth taxes being imposed by the government.

The ‘Stop The Handover’ campaigners will be taking their protest to the streets of Skibbereen the weekend of February 11th. 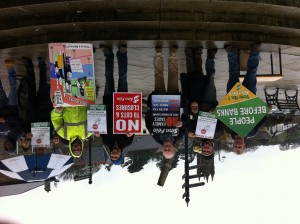