Charleville local Aileen Browne was selected by Fine Gael to contest next year’s Local Elections for the Fermoy area  last Sunday. Aileen Browne is a strong Community activist in the Charleville Area. She is Secretary to both the Tidy Towns and the Charleville Community Forum and has played a leading role in the Electric Eighties fundraising weekend and in resurrecting the Charleville Cheese Festival in 2011 after a twenty year gap.  At the packed Convention last Sunday she was described by her proposer Seamus O’Connor, Charleville as a ‘tireless community activist’ and some who has ‘energy by the  bucket full, 24 hours a day 7 days a week’  Math Ryan, Newtownshandrum who seconded Aileen’s nomination added that in Aileen Browne ‘you have a candidate of outstanding ability, a candidate who has indebt knowledge of politics and community affairs’.

A very large number of Fine Gael members from Charleville, Ballyhea and Newtownshanrum joined Aileen’s Mother Kathleen Browne and many other family members, supporters and friends at the Convention  to witness Aileen’s selection. During her address to the 250+ Fine Gael Members Aileen Browne outlined her community, political and professional experience. Aileen discovered her passion for politics while a student in UCC where she went on to elected Vice President of UCC Students’ Union. She has been a member of Fine Gael ever since her college days and was Director of Elections for Minister Michael Noonan and Charleville native Kieran O’Donnell T.D. in the last General Election. She assured members that she would win a seat for Fine Gael and ensure that the people of Charleville, Newtownshandrum, Ballyhea. Doneraile and indeed all the Fermoy are would be well represented on Cork County Council after next year’s elections.

Speaking to the TheCork.ie this week Aileen said that she was proud and delighted to have been selected by Fine Gael to run in the Local Elections. ‘It is a great honour to be selected and I have been overwhelmed with the messages of support and offers of assistance by so many people locally’. With 6 Councillors to be elected and no sitting Fine Gael Councillor contesting the Elections in the Fermoy Area Aileen said that she believes she has a very good chance of getting elected next May.

The other candidates selected last Sunday were Kay Dawson from Mitchelstown and Phil Leahy from Ballyhooly. 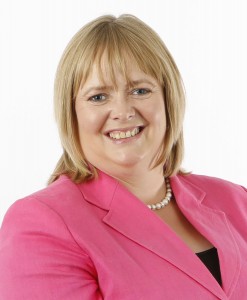