A biosciences startup based in Little Island, Cork has secured
€750,000 in venture funding through a syndicate of investors.

The company is called Metabolomic Diagnostics, and the funders include
including SOSventures Ireland Fund, AIB Seed Capital Fund and
Enterprise Ireland.

Metabolomic Diagnostic can “revolutionise pre-natal care” with a blood
test called “PrePsia”. It allows early detection of women at high risk
of developing pre-eclampsia during their pregnancy.

There is currently no predictive early screening test for this
condition which can be a fatal.

Each year more than 75,000 women die as a direct result of
pre-eclampsia. While the condition begins in early pregnancy, it does
not typically manifest until the second half of the pregnancy.
Characterised by rapid high blood pressure and elevated protein in
urine and once it escalates, the only treatment option is the delivery
of the baby, often prematurely.

Minister for Research and Innovation, Sean Sherlock TD welcomed the
investment stating “This is an important investment, given the
potential significance of this metabolomic diagnostic test, the
results of which include saving lives. I look forward to following the
results of this innovative technology in the future.”

The company has been privately funded to date, following the licensing
of the technology from University College Cork. CEO Charles Garvey is
a serial entrepreneur, who has led a significant number of technology
startups to successful exits at home and internationally, including
Horizon Technology Group, which floated on the London and Dublin stock
markets at a valuation of £90 million, and was subsequently acquired
by Avnet. 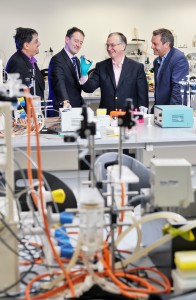