Sinn Féin EU candidate for Ireland South Liadh Ní Riada has spoken of
the ‘poignancy’ of her visit to a hall in University College Cork’s
Music Department that is named in honour of her late father Sean Ó
Riada.

Ní Riada was on the campus this week to fulfil a number of engagements
including an address at AGM of the university’s Europa Society.

“It was poignant moment for me personally. There is a legacy to the
name Sean Ó Riada but to seven children he is our father. So you have
to balance out all the images and facets of his life.

“I am proud of his achievements and that there is a hall named after
him in University College Cork.

“I hope that his legacy inspires students of today.

Above all he had a deep and sincere love for Irish music and culture.
I think that is my own enduring understanding of my father.

“That was my main thought as I looked around the hall.” 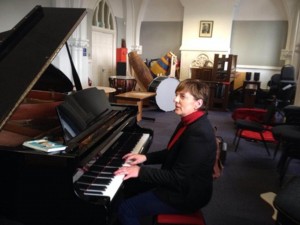