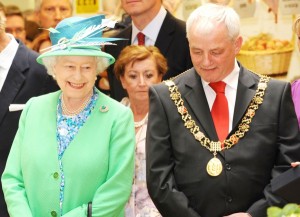 New inside details about the Queen’s 2011 visit to Cork – and the rest of Ireland – will be given in an programme airing tonight, The state visit was the first time a British monarch had ever set foot in the Republic, and security was high.

For the first time details have been made public about a bomb scare in the Market on the morning of the visit.

The Lord Mayor in 2011 was Labour Cllr Michael O’Connell.

He was at home in Shaknakiel that morning getting ready with his family for the big occasion,

Michael O’Connell has been telling TheCork.ie today how someone else in the house answered the phone and wasn’t sure whether or not it was worth reporting….