Here at TheCork.ie we believe that University College Cork (UCC) is Ireland’s finest University! but concern has been expressed elsewhere that UCC is losing part of its history.

The University – founded in 1845 – has long has had the motto of “Where Finbar Taught Let Munster Learn”. However it has been noticed latest version of the Crest leaves out that wording, the change occurred sometime since July 2012 and many are unhappy that the motto has been removed.

UCC was established in 1845 as Queens College Cork. The site is associated with the educational activities of a the man who – legend has it – founded Cork: St Finbarr. It’s believed that his monastery and school stood nearby

Today the historic quad is tastefully surrounded by newer buildings such as the Student Centre, and Boole Library but has UCC gone too far in dropping the motto from its crest and leaflets?

While the logo has gone through many variations over the years this appears to be the first time the motto has disappeared.

Old crest (has motto underneath)

New crest (no motto underneath)

I asked people in UCC over the weekend what they thought 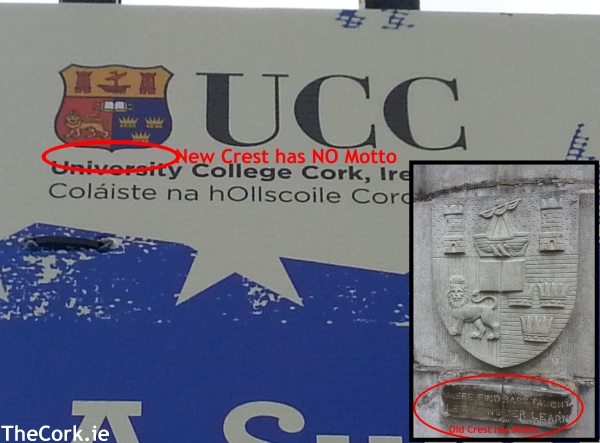