Minister for Housing, Planning, and Local Government, Eoghan Murphy, today (12 December) published a report of the Cork Implementation Oversight Group which outlines the proposed delineation of an extended boundary for Cork City.

The Cork Implementation Oversight Group, which was established in July 2017 on foot of recommendations of the Cork Expert Advisory Group (The MacKinnon Report), was tasked with overseeing arrangements for the alteration of the boundary between the respective areas of jurisdiction of Cork City Council and Cork County Council and producing an Implementation Plan for that purpose.

Speaking today, the Minister said ”As a result of the group’s deliberations with the chief executives and senior staff in both councils in relation to the alteration of the boundary between their administrative areas, both Chief Executives agreed to recommend to their respective Councils a specific proposal for a new boundary” 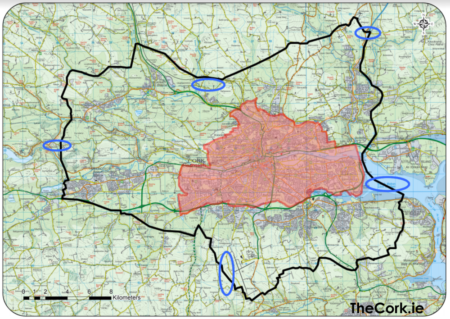 The proposed boundary follows generally the boundary of the City and suburbs shown by the 2016 CSO census report but excludes areas east of the M8 motorway. In the south, it extends to include all of the zoned airport area and on the north side it extends above Glanmire to the west of the M8. It includes Tower and Blarney but excludes the Monard Strategic Development Zone.

The report proposes that Ballincollig be included in the City as a metropolitan town and considers that it will continue to thrive within an appropriate new city local government structure. However, despite its proximity to the city, little Island does not have a significant level of population and so it will remain in the county.

The Minister continued “It has taken almost 3 years to get to this position, a position that will allow Cork to have a more appropriate local government structure which is essential to help it reach its full potential and serve the people of both the city and county as effectively as possible. The Government has accepted the recommendations of the Cork Implementation Oversight Group and now call upon the elected members and executive of both councils to embrace the boundary alteration process as a matter of urgency and to provide full and active support for the significant programme of associated implementation actions that lie ahead. I am open to using the statutory procedures in Part V of the Local Government Act 1991 if the local authorities can confirm, as a matter of priority, agreement using this approach. Alternatively I will bring forward primary legislation to implement the boundary alteration, and have received Government approval for this course of action, as necessary”.

Further detailed preparations for the implementation of the boundary alteration will be overseen by the Oversight Group, including details of consequential financial adjustments and arrangements. Financial adjustments and arrangements will also be underpinned by the relevant statutory provisions or instruments.
Commenting on the Group’s boundary report, the Minister of State for Local Government and Electoral Reform, John Paul Phelan said ‘I would like to commend all concerned on their work and having arrived at what appears to be a reasonable settlement in the best interests of Cork.”