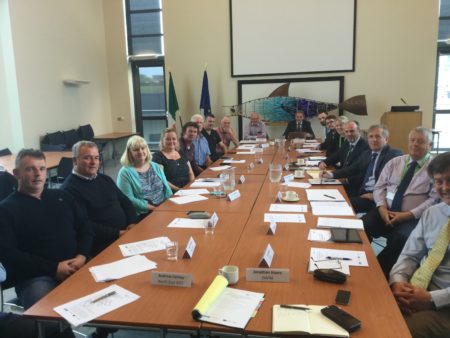 The Minister for Agriculture, Food and the Marine, Michael Creed T.D., today announced that he has approved a new conservation measure that will provide legal protection for v-notched crawfish. The measure received widespread support when the Minister discussed it with industry representatives during today’s meeting of the National Inshore Fisheries Forum (NIFF) at the National Seafood Centre in Clonakilty, Co Cork.

The conservation measure stems from a proposal initiated by members of the fishing industry in the southwest, in consultation with the Marine Institute, which sought legal protection for crawfish v-notched under a Marine Institute project in that region. At today’s NIFF meeting, the Minister also invited the Forum members and the marine agencies to provide their views on an appropriate lead-in period for the new measure.

Commenting on the introduction of the measure, Minister Creed said, “I am pleased to announce the approval of this measure, which has the potential to support the recovery of the crawfish stock in its traditional fishery areas along the South West and West coasts. The Inshore Fisheries Forums, now five years old, continue to embrace the challenge of developing measures to support the sector on the path to long-term sustainability. I have asked my officials to draft the appropriate legal instrument to implement this measure.”

The proposal to protect v-notched crawfish was developed by the North West Kerry Shellfish Co-operative in collaboration with the Marine Institute. It arose from a scientific project carried out over the last two years by the Marine Institute and commercial fishermen targeting crawfish in the southwest. The project, funded by the European Maritime and Fisheries Fund Biodiversity Scheme, seeks biological data on crawfish and investigates crawfish migration.

The proposal was submitted to the South West Regional Inshore Fisheries Forum, which brought it forward to the NIFF for wider industry discussion. The NIFF recommended the proposal to the Minister in January.

The crawfish measure was among a range of inshore fishing issues discussed with industry representatives at the today’s NIFF meeting, which also included implementation of the Inshore Fisheries Sector Strategy as well as proposals for the mackerel hook and line fishery and the management of the landing of crab claws.

A crawfish is ‘v-notched’ through the removal of a v-shaped notch from one of the flaps (known as uropods) either side of the central part of the tail (telson) of a crawfish when it is first caught. A similar provision is in place to protect v-notched lobster under S.I. No. 591 of 2014 (Lobster (Conservation of Stocks) Regulations 2014) and has proved a popular and effective stock management tool.

Crawfish Fishing
More than 200 tonnes of crawfish was landed in 1989, but landings have declined since then with landings in recent years in the range of 20-30 tonnes per annum.

Eilbhe’s fine art ink paintings are a flight of fancy
Previous Post
FARMING: Shareholders told to be wise
Next Post
Tweets by @TheCork_ie