By TheCork.ie on 1st August, 2019Comments Off on FARMING: Minister seeks public input into next ‘Agri-Food Strategy’ 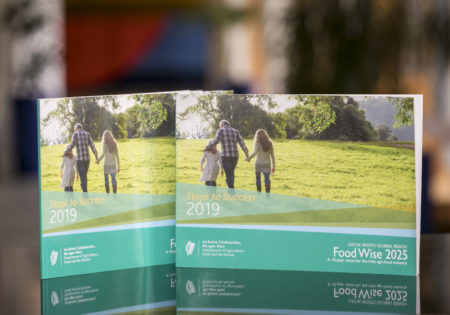 The Cork based Minister for Agriculture, Food and the Marine, Michael Creed TD, has opened the Public Consultation on Ireland’s next Agri-Food Strategy to 2030.

Food Wise 2025 is the current ten-year strategy for the agri-food sector in a series of ten-year plans that have been in place since 2000. They are renewed every five years and preparations have begun on the new strategy to 2030. In launching the public consultation, the Minister said, “while Food Wise has been instrumental in providing a framework for the sustainable growth of the sector, like all strategic plans, it must evolve and respond to rapidly changing circumstances”. The Minister went on “we are facing new challenges, in particular the uncertainty posed by the possibility of a no-Deal Brexit, as well as the need for the sector to contribute effectively to climate action. There are also new and emerging opportunities for the sector, for example, in the bioeconomy”.

The Minister remarked “while we are embarking on this policy process against a background of considerable change and uncertainty, for example in relation to Brexit and CAP reform, that uncertainty makes it more important than ever that we come together to agree a coherent planfor the sector to 2030”.

“The development of the next agri-food strategy will be a major milestone for the sector and I would urge all interested groups and individuals to contribute to the public consultation. This is your opportunity to have your say and I look forward to receiving everyone’s input”.

The Minister also took the opportunity to launch the fourth progress report of Food Wise 2025, entitled “Steps to Success 2019”.

Steps to Success 2019 highlights the progress achieved in year four in the implementation of the Food Wise 2025 strategy. Minister Creed chairs the Food Wise High Level Implementation Committee (HLIC), involving senior officials from relevant State Agencies and Government Departments, who meet regularly with stakeholders to ensure that implementation is a live and dynamic process. It provides a forum to review progress to date and understand the significant challenges ahead, with a focus at recent meetings on the twin challenges of environmental sustainability and Brexit responses.

The Minister said, “Agri-food exports have increased by 73% since 2009. The Food Wise process allows all stakeholders to engage strategically to ensure the continuing success of our most important indigenous industry, which is crucial for the national economy and especially for rural and coastal areas. Steps to Success 2019 outlines continued progress in the development of the sector, including the ongoing market development work, which continues to broaden the range of different countries to which we export our agri-food products and the opening of the new Prepared Consumer Foods Centre in Teagasc, Ashtown.”

FARMING: Minister seeks public input into next ‘Agri-Food Strategy’ added by TheCork.ie on 1st August, 2019
View all posts by TheCork.ie →