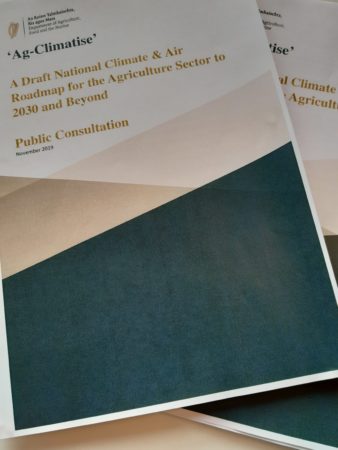 The Cork based Minister for Agriculture, Food and the Marine, Michael Creed, T.D., today launched a public consultation on “Ag-Climatise”, a National Climate & Air Roadmap for the Agriculture Sector to 2030 and Beyond.

The Minister stated, “The importance of addressing climate change and reducing greenhouse gas emissions has been reflected in the recent All-of-Government Climate Action Plan 2019 and which has clearly set out the ambition for Ireland”. The Minister added, “The agricultural sector will play its part in the transition to a low carbon, climate resilient economy and society of the future, while also taking advantage of the opportunities that this challenge presents”.

The All-of-Government Climate Action plan contains an emissions reduction target of 10% to 15% for agriculture, bringing emissions to be between 17.5 and 19 Mt in 2030. The sector will also contribute to the removal of 26.8Mt CO2 from the atmosphere through afforestation and new ways of managing land. Using these targets as an overarching framework, Ag-Climatise is the roadmap for the agri-food sector.

The consultation document proposes a number of ambitious and challenging actions and targets which will require ongoing and concerted effort, but also a step-up right across the sector from primary producer through to the processor. The challenge is to change the trajectory of emissions from agriculture so that the absolute emissions count is reducing.

As a country, Ireland exports 90% of the food it produces, selling to 178 countries all over the world, and consumers have never been more conscious of the environmental footprint of the food they consume. The Minister said “Irish agriculture has become one of the most carbon efficient producers of beef and dairy in Europe and under our Origin Green banner, this is widely recognised, but we can, and need to do even better. I am confident that if farmers, industry and the Department work together, the Agri sector will play a big part in Ireland achieving its climate commitments.”

The structure of the roadmap is composed of three elements:

A consultation process is now open, and the Minister concluded “I would really welcome farmer views in developing this plan. We will listen to farmers and take on board their views as we finalise the roadmap over the coming months. By working together, implementing practical changes on farm, we can secure the family farm for generations to come.’’

The consultation will end on Friday 10 January 2020.

The consultation is composed of two elements:

which sets the scene and poses a number of questions.

2. An online survey to facilitate a response to the questions. Ag-Climatise Survey. The survey will take about 35 minutes to complete.