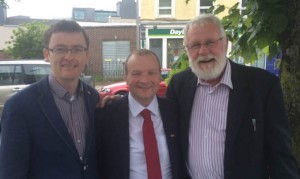 14 April 2015 By David O’Sullivan david@TheCork.ie Workers’ Party Cork City Councillor Ted Tynan has called on the Fine Gael-Labour coalition government to “re-nationalise the Whitegate Refinery in the national interest” and to ensure Ireland retains the ability to refine oil products and keep a strategic reserve in case of future oil shortages which could […]

10th December 2014, Wednesday By David O’Sullivan david@TheCork.ie I asked people in Cork City for their thoughts. Is there an appetite to travel to the nations capital (some 3 hours away) to protest against water charges.

21st November, Friday 3pm By David O’Sullivan http://twitter.com/david_osullivan The Taoiseach was in Cork today for a number of official engagements for positive announcements In the morning our reporter David O’Sullivan had the details of the Taoiseachs busy schedule… The Taoiseach started off in the Clarion Hotel where he turned the sod (across the river) on […]

10th September 2014, 3pm By David O’Sullivan david@TheCork.ie The first blockade to stop the installation of water meters on the Northside of Cork City continues. It’s close to Mayfield in the Barnavanra Crescent Housing Estate. (Technically the area is within the Cork County COuncil area but it borders the City Council area. Interestingly installation of […]