21 October 2020 By Tom Collins tom@TheCork.ie ‘Cork Kerry Tourism’ used to be a thing, as the two Counties were often marketed together. The marketer’s dream was a wealth American Tourist who would fly into Cork Airport, and spread his/her waller around before heading to the Lakes of Killarney, and doing the same. ‘Killarney’ was […]

Keep yourself busy by giving your house a spruce up

21 October 2020 By Roger Jones roger@TheCork.ie Anyone can live in a house, but how many actually come back to a home? The walls surrounding every home shouldn’t just have nice aesthetics, they should convey a message that emphasizes comfort, style, and elegance. But there’s a catch, your house may have given you that comfortable […]

Types of Irish Gambling in 2020

21 October 2020 By Roger Jones roger@TheCork.ie Gambling has been a favourite past time for the Irish people for a very long time. Ireland’s gambling laws date back to 1926 when the Betting Act outlawed all forms of gambling in the country. In 1931, the government revised this Act by moving away from total prohibition […]

20 October 2020 By Elaine Murphy elaine@TheCork.ie The Mayor of County Cork, Cllr. Mary Linehan Foley has extended congratulations to West Cork filmmaker Pat Collins on his election to Aosdána, the affiliation of creative artists in Ireland. Aosdána, founded in 1981, honours artists whose work has made an outstanding contribution to the creative arts in […]

Two authors are the “Cork Persons’ of the Month”

19 October 2020 By Tom Collins tom@TheCork.ie Award winning writers William Wall and Tadhg Coakley are very much part of Cork’s great literary tradition and both have now been chosen as October Cork Persons’ of the Month. William Wall was born in Cork City but grew up in the East Cork village of Whitegate. He […]

18 October 2020 By Tom Collins tom@TheCork.ie The traditional Lord Mayor of Cork’s visits to schools have been re-imagined for the 2020/2021 term. In the 101st year since the much-loved and popular tradition was begun by Terence MacSwiney during his mayoralty in 1920, the Lord Mayor of Cork, Cllr. Joe Kavanagh will not be making […]

LIFEHACK: How to get afternoon tea from a Hotel, despite COVID19 closure 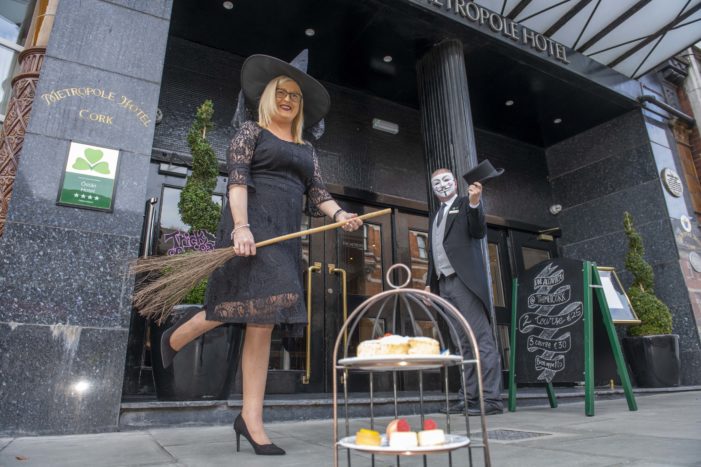 18 October 2020 By Bryan Smyth bryan@TheCork.ie LIFEHACK: How to get afternoon tea from a Hotel, despite COVID19 closure? Answer: via a takeaway! It’s all treats and no tricks at The Metropole Hotel in Cork this October. The Mac Curtain Street Hotel will see a massive fall in revenue due to the lack of the […]

14 October 2020 By Bryan Smyth bryan@TheCork.ie Cork International Film Festival and Docs Ireland have announced their inaugural 2020 Ignite documentary development programme participants. This exciting venture is a cross-border partnership which seeks to foster a new generation of Irish documentary filmmakers from the north and south of Ireland. The programme is a pilot bilingual […]

Q: What’s the name of the new black (well, dark green really) coloured building next to the Train Station? A: “The Dean, Cork” Hotel

14 October 2020 By Bryan Smyth bryan@TheCork.ie If I said to you “The Dean of Cork” you might think I was referring to a religious title, because there is a gentleman who is the “Dean of Cork & Rector of St. Fin Barre’s Union” within the Church of Ireland, the current gentleman’s profile is here. […]

Cashless Payments Flourish Thanks to Corona

14 October 2020 By Roger Jones roger@TheCork.ie One thing that’s characterised the coronavirus pandemic seems to be misinformation. First, World Health Organisation said there was nothing to worry about at all. Then it changed its mind. Next, we heard that children couldn’t transmit the virus. Evidence of increased spread with the reopening of schools now […]

12 October 2020 By Bryan Smyth bryan@TheCork.ie Cork County Council successfully received a grant of €40,000 from the Department of Rural and Community Developments under the Second Round of Town and Village Renewal Scheme – Accelerated Measure in Response to Covid-19 for upgrade of footpaths in Kanturk Town Park. The focus of the funding is […]