Tidy Towns Volunteer is Cork Person of the Month

The vice-chairman of Ballincollig Tidy Town’s committee Pat Clarke has
received the September Cork Person of the Month award.

“Pat very much epitomises the hard work put in by Tidy Town
volunteers, not only in Ballincollig, but throughout the county”, said
awards organiser Manus O’Callaghan.

Pat was at the forefront of the campaigns that led Ballincollig to
another gold medal win in this year’s National Tidy Towns competition,
a silver medal in the European Entente Floral competition and he also
had time to help transform some waste ground to a raised flowerbed at
An Caislean in the town which was recognised by President Higgins at
an awards ceremony at Aras an Uachtarain recently.

” At evenings and weekends, Pat Clarke’s green pickup is an
ever-present sight, ferrying tools to the volunteers and picking up
bags of rubbish. Not alone is he also very active on the ground
himself with the work but he also plays a significant role behind the
scenes ” said Tom Butler, Chairman of the Ballincollig Tidy Towns
Committee.

The Ballincollig Business Association (BAA) who nominated Pat Clarke
for the award, said that Pat and his colleagues have transformed the
town and pulled the whole community together.

” Our local population embraced the Entente Floral and it was a huge
privilege to represent Ireland in the town category of this European
competition. The results were very visible not only with a silver
medal, but with the wonderful floral displays and hanging baskets
throughout Ballincollig” said Emer Cassidy of the BAA.

Pat Clarke’s name now goes forward, with the other persons of month
chosen this year, for possible selection as Cork Person of the Year,
at a Gala Awards Lunch on January 17th (’14) next at Rochestown Park
Hotel. 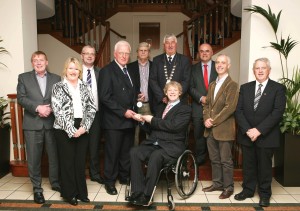