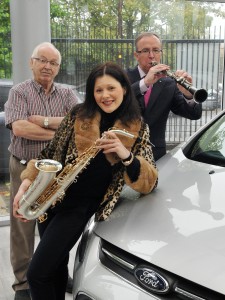 Introducting the Ford Kuga. A halfway-house between a traditional 4WD and an estate car. It’s classed as a sport utility vehicle (SUV).

The Kuga has been produced by Ford since 2008, but not alot have been seen on Irish Roads. That will change this weekend. In an effort to promote the Model Ford Ireland – which is headquartered in Cork – has provided two Kuga models to the organising team of the festival and they will be used for ‘on the ground’ coordination and management of the festival, which is now in its 35th year.

The Kugas that will be used at the festival feature Ford’s 2.0-litre TDCi 140hp diesel engine and come equipped with the SYNC in-car connectivity feature that will allow passengers to stream music from their smartphones or iPods. In the longer term that will threatening terrestrial Radio for listenership, but in the short term it is a feature which consumers like.

“The Ford Kugas are an excellent addition to our team,”
said Bernard Casey, Chairman of the Guinness Cork Jazz Festival organising committee.
“And they will be a great help with the inevitable multitude of ‘ferrying and fetching’ tasks that are part and parcel of a huge operation like our Festival”.

“Given our strong Cork roots, we are only too happy to help Bernard and his team by providing some models of our new Kuga… for moving people or instruments, the Kuga will get the job done without any fuss and with high tech touches like the hands-free tailgate, loading and unloading can never be a problem,”
commented Eddie Murphy, Chairman and Managing Director of Ford Ireland.