A Skibbereen retailer has broken the world record for unclasping the
most bras ever in 60 seconds! Sean Murray of Sean Murray Fashions,
Skibbereen succeeded in unclasping 91 bras in his shop on Saturday
afternoon as part of his fundraising drive for Get the Girls, the
Irish Cancer Society’s breast cancer awareness campaign.

Sean announced his intention to smash the record of opening 69 bras in
60 seconds earlier this month to much amusement but the Skibb man had
the last laugh on Saturday when he successfully unclasped 91 double
hooked bras with one hand which were worn by male and female
volunteers.

Two other record attempts; measuring more than 500 ladies for bras and
a mix of 500 men and women for jeans had to be postponed on the day
due to flooding in Skibbereen on Thursday night which saw Sean and his
wife spend much of the night moving stock to safe ground. These record
attempts will now take place at a later date.

Speaking after his record breaking feat Sean said,
“That was brilliant – I can’t believe we did it, all the practise has
paid off! All week I knew I could do it as preparations were going
well but the cheers of the supporters today meant that I exceeded my
expectations! The next step is to send everything off to the people
at the Guinness Book of Records now to get official verification which
will take about six or so weeks but I am happy that we have adhered to
their strict guidelines!

I would like to thank everyone who volunteered their services today
and the past week, coming in to help me prepare – I couldn’t have done
it without them or my wife Maria! I hope we have raised lots of money
for the Irish Cancer Society which is what this was really all about
and we look forward to tackling the other two records in the coming
weeks as well.”

The generous retailer offered customers €2.50 discount from the sale
of each bra sold throughout October and matched this to give €2.50 to
the Irish Cancer Society. He also gave a €5.00 donation to the charity
for every pair of jeans sold for the month of October. 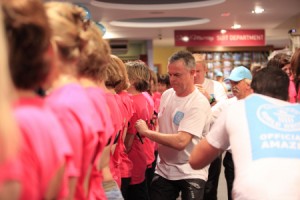