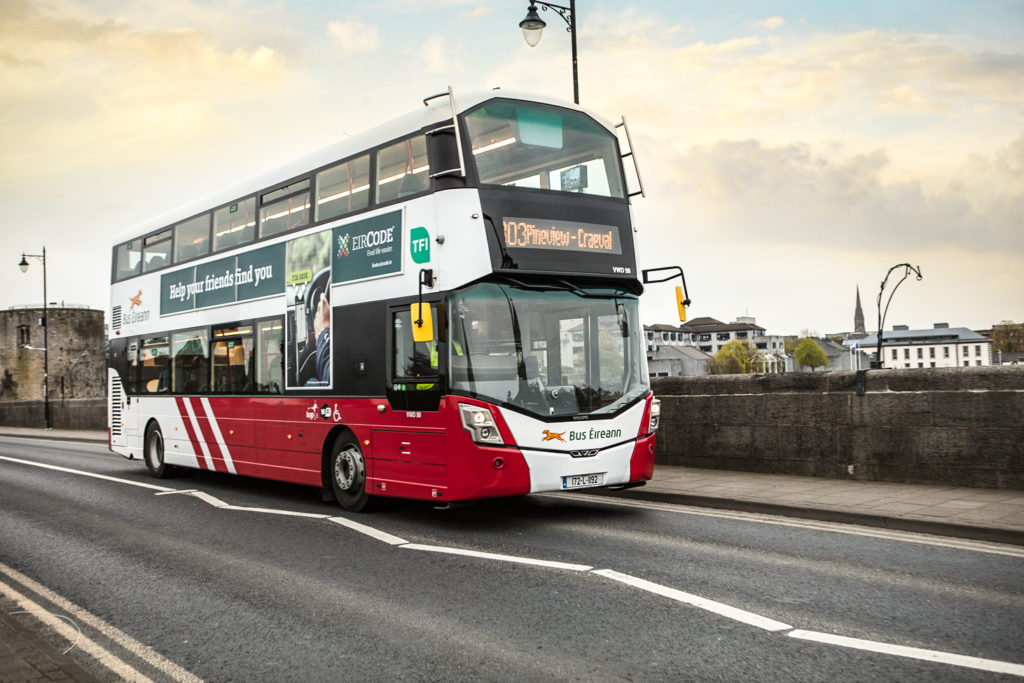 Bus Éireann was once again a major contributor to the local economies of Cork and Waterford in 2013. Bus Éireann employs over 700 people in the region with €25m spent on wages and over €35m spent on local goods and services during the year.

During 2013, Bus Éireann introduced enhances to services on a number of routes in Cork city/Waterford city to improve frequencies and provide extra departures. For example, as part of an ongoing review undertaken by the National Transport Authority (NTA) on public transport services in Cork, Bus Éireann announced revised timetables on the following Cork city routes, 202, 205, 206, 207, 212, 215 & 226/226A.

The revised Waterford city network came into effect on the 24th of March 2013. New route numbers were introduced for city services in Waterford in line with the National Transport Authority’s plan to assign a unique route number to all public bus passenger services. This was to facilitate the rollout of Real Time Passenger Information in Waterford, which gives passengers up to the minute bus arrival and departure times.

New bus stops were introduced on the Route 360A service at W.I.T. and Six Cross Roads, Business Park, which gives passengers greater options to avail of the service on route without going to the city centre.

A new timetable was introduced on the Route 2, which operates from Wexford to Dublin city/Dublin Airport to include an earlier departure time from Wexford in the morning to accommodate commuters travelling to Dublin. Also additional bus stops were put in place at Arklow, Jack Whites Cross, Beehive, Financial Services and O2 Dublin.

Additional services were added on the Route 55 Waterford to Limerick, to accommodate students travelling to/from college on Fridays and Sundays. The revised timetable also saw the introduction of some new bus stops in Monard, Tipperary, Clonmel and Carrick on Suir.

Bus Éireann was also one of the corporate sponsors for the Community & Voluntary Awards in County Waterford, sponsoring the award for Social Inclusion. The award ceremony took place in Dungarvan on Thursday the 28th of November 2013.

New digital information Kiosks were installed at both Cork and Waterford Bus Stations with direct internet link for customers.

We had a very successful shuttle service operated from Lapps Quay to Páirc Ui Chaoimh for the Bruce Springsteen concert in July.

The World Champion Racewalker Rob Heffernan was welcomed home to his native Cork on board the Bus Éireann Open Top bus on Friday the 16th August and over 10,000 people were present in St. Patrick’s Street to celebrate his magnificent achievement.

The Parnell Place Realignment and Upgrade Scheme, which will enhance the streets and junctions in the vicinity of the Bus Station, commenced in October. The project will be completed in Q1, 2014 and will include improved access for pedestrians to/from the Bus Station and additional bus lanes in Parnell Place.

The Integrated Ticketing/Leap card project will be operational in Cork in Q1 2014, and the background work is underway since September 2013.

Training Inspector Charlie Simpson from Waterford was presented with an award by Mr. Gay Byrne, Chairman RSA in recognition of his contribution to Road Safety in Ireland (Bus Category) for his excellent training.

“For over 25 years, Bus Éireann has been an essential and integral part of Ireland’s transport infrastructure. We are continuing to build on that tradition of public service and transport expertise to give Ireland a bus and coach system, which it can be proud of”, said Joe Fitzgerald, Regional Manager, South, Bus Éireann.