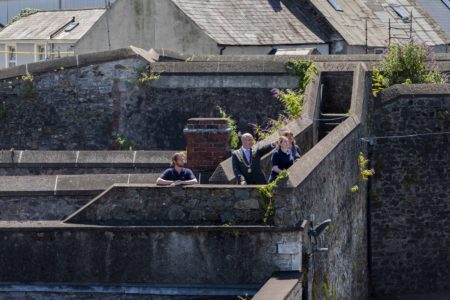 The walls of Elizabeth Fort tower above the southside of Cork City
Picture: Clare Keogh

One of the finest existing examples of a 17th Century Star Fort has been handed over to Cork City Council by the Office of Public Works (OPW). It follows a path in recent years of the OPW divesting itself of attractions, and giving them to local authorities, a practice which has diluted the usefulness of the OPW season card, but on the other hand is a boost for local authorities which have been losing other services.

After many decades as a police station and a Garda education centre, the Office of Public Works are transferring ownership of Elizabeth Fort to Cork City Council, who intend, with the assistance of Failte Ireland, to develop the facility as one of Ireland’s premier tourism attractions. Situated at the heart of a cluster of existing attractions, which include the Honan Chapel in U.C.C., St. Finbarre’s Cathedral, the Red Abbey, Christchurch on South Main Street, the remnants of the old city wall in Cork’s Peace Park and the English Market, the Fort will act as a hub for this wonderful grouping of tourism attractions.

The courtyard area within the Fort also lends itself to public performance and it is envisaged that a programme of theatrical and musical performances will be developed for this unique location, along with the possibility of a periodic medieval market. It is intended that the Fort will open to public viewing this coming Spring and that it will be developed substantially over the next three years. The audio tour guide given to visitors will include a Voice-over by Cork’s David O’Sullivan of www.VoiceOverArtist.ie

Today’s ownership transfer was executed at Elizabeth Fort by Brian Hayes T.D., Minister for State at the Department of Public Expenditure & Reform, who has overall responsibility for the Office of Public Works.

Elizabeth Fort is in a strategic position, on a hill overlooking the City, meaning that almost every City landmark can be seen from it’s ramparts.

Cork Historian Liam O’Higgin says when the fort opens to tourists later this year people will have a great view of the City, Liam outlines what can be seen: