Cork’s Red FM is delighted has secured additional access to, and reporting rights for all Cork GAA matches.

The station had previously been permitted to enter locally hosted National League and Munster Championship fixtures, but will now receive full press accreditation for all games involving Cork GAA.

The station will now be in a position to provide live on-air updates from games, and will have access to the post-match press conferences.

Cork Senior Hurling and Football Captains, Stephen McDonnell and Paul Kerrigan, along with Hurling Manager Kieran Kingston and Football Selector Eoin O’Neill were on hand to help in the launch of this new deal. 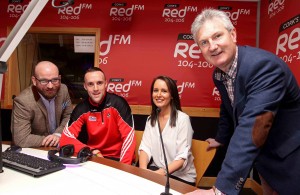 It comes ahead of a bumper weekend of Gaelic Games coverage this weekend where Cork’s Red FM will provide updates from the National League double header featuring Cork versus Dublin on Saturday, before full coverage of the All Ireland Camogie Club Finals featuring Milford, at GAA Headquarters on Sunday.

Commenting on the new Rights, Cork’s Red FM CEO Diarmuid O’Leary has said “Corks Red FM are delighted to be further extending our coverage of the inter-county teams for both men and women. We look forward to sharing their on-field performances with the Cork supporters”

Ruairi O’Hagan, presenter of the sports show The Big Red Bench was thrilled with the news, saying “This shows our commitment to providing top class GAA coverage, and we’re massively excited. Along with our continued support of local Gaelic Games in Cork with our sponsorship of the RedFM Senior Hurling League, this shows how determined we are to support and promote our national games.

Lisa Lawlor of Red FM Sport said “We’re really excited about this development, we enjoyed some fantastic outside broadcast experiences last year, including the All Ireland Quarter Final in Thurles, now adding to that programming we’re delighted that we can now bring you all the action live from the stadium as well.”