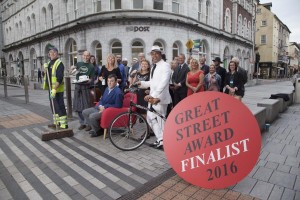 The Academy of Urbanism in London has named Oliver Plunkett Street as the only Irish Finalist in the ‘The Great Street Award 2016’ – 200 years after the street was first laid out. The street is one of three finalists to be named by the Academy and will compete against Cairns Street in Liverpool and Deptford High Street in London.

The Academy of Urbanism was established in London in 2005 and aims to create a body of evidence of how great places are created, but also sustained. Members of the Academy will travel to Cork on 12 August 2015 to assess the street and engage with the public, private and community sectors of Oliver Plunkett Street.

Speaking at the announcement Clodagh Daly, co-founder of the Plunkett Quarter said: “We are absolutely delighted that Oliver Plunkett Street has been recognised as a finalist in ‘The Great Street Award 2016’. As one of the many business owners on Oliver Plunkett Street, it is an honour to be part of this wonderful street which offers a unique blend of shopping, hospitality and business.”

Patrick Ledwidge, Director of Services, Cork City Council commented: “The Academy of Urbanism brings together a group of social thinkers and practitioners involved in the social, cultural, economic, political and physical development of villages towns and cities across the UK, Ireland and Europe. They recognise the most enduring and improved urban environments and we are absolutely delighted to have Oliver Plunkett Street recognised in this regard. It is a street with history and credibility and we look forward to the judging outcome in November.”

Valerie Cahill, co-founder of the Plunkett Quarter added: “We believe that Oliver Plunkett Street has all of the requirements to make it the winner of ‘The Great Street Award 2016’ and we look forward to meeting with the Academy judges and showcasing the unique history and charm of the street.”

Oliver Plunkett Street was laid out across the marshes on the east side of the old medieval city in 1715 and at 525m is the longest street in the city centre. The street was originally named after the newly-crowned King George and became the centre of Cork’s commercial life, where Cork’s affluent and professional elite lived, worked and shopped. It has remained with this role consistently since. The street was renamed Oliver Plunkett Street following the creation of the Irish Free State in the 1920s.

The winner of ‘The Great Street Award 2016’ will be announced at the Urbanism Awards Ceremony in London on 6 November 2015.