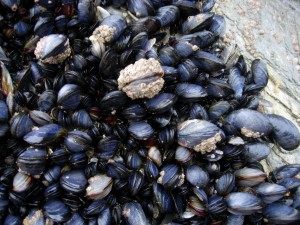 It’s rare to see something negative about West Cork – the scenic tourist friendly section of Co Cork – but alas today word reached us that the The Food Safety Authority of Ireland (FSAI) advises of a food recall of fresh mussels supplied from
Roaringwater Bay. The affected mussels would not be toxic to humans, but would cause illness.

The mussels were harvested from Roaringwater Bay, Co. Cork on Monday and Tuesday of this week and may contain harmful levels of “diarrhetic shellfish poisoning” (DSP) toxins. These mussels were sold loose and in bags at fresh fish counters in some retail outlets nationwide. The FSAI is warning consumers who may have the product at home not to eat the affected mussels.

The implicated mussels have now been removed from sale. The FSAI is warning consumers who may have the mussels to check with the store where they purchased them and not to eat them if they are implicated in this recall.

The implicated mussels were available for sale loose from the following retail outlets:

The above outlet names were provided by the Food Safety Authority in relation to this particular recall only. This is no reflection on the excellent produce normally stocked by those outlets.

According to Dr Pamela Byrne, Chief Executive, FSAI it is important that consumers who may have bought the implicated mussels not to consume them.

“Cooking does not destroy this toxin. Eating contaminated mussels could cause diarrhetic shellfish poisoning. Symptoms are diarrhoea, nausea, vomiting and abdominal pain which can start between 30 minutes to a few hours after ingestion. Complete recovery occurs within a number of days. Consumers who may have already consumed this product and are feeling unwell should seek medical advice,” she says.