The World Beer Award-winning Franciscan Well Brewery is to welcome throngs of beer-lovers to its annual Octoberfest, a world beer extravaganza, from the 23rd to 25th October at the Brew Pub and Brewery on North Mall.

An exotic line up of beer and delicacies will be showcased over the weekend including Tuatara Sauvinova Single Hop IPA and Aotearoa Pale Ale, both hailing from New Zealand, and the Espiga Hop Collection Series – Amarillo from Spain.

Music will be provided by Cork-based blues outfit One Horse Pony, as well as swing-jazz quartet Pinky Trolley, and trad band Lyda.

The October Beer Fest will be open from 5pm Friday 23rd, and from 2pm on Saturday and Sunday 24th –25th October. Entrance is free. 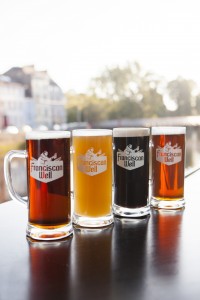 The Franciscan Well Brewery was founded in 1998 on the North Mall in Cork City and is built on the site of an old Franciscan monastery – and well – dating back to the year 1219. Legend has it that water from the well had miraculous and curative properties, and people would come from afar to drink from it. The Brewery has combined modern technology with age old tradition, brewing classic beer styles including lager, ale, stout, and wheat beer.

Putting innovation at the forefront of the brewing process, Franciscan Well place huge emphasis on the importance of collaborations, seeing major success with their award winning Jameson Stout and Jameson Pale Ale. The complete Franciscan Well range includes the iconic Rebel Red and Chieftain IPA, as well as Friar Weisse, Shandon Stout, Jameson Stout, Jameson Pale Ale, and the seasonal brews created on site. Since 2013, the brewery has won 30 prestigious international awards for their beers. All of the beers brewed at the Franciscan Well use the finest natural ingredients and are additive-free.