The official launch of the HEINEKEN Ireland commissioned publication Beamish & Crawford: The History of an Irish Brewery , took place today in the unique and appropriate setting of the Long Room of the Crawford Art Gallery.

HEINEKEN Ireland’s support for the publication of this iconic book highlights the company’s commitment to protect the heritage of Beamish & Crawford and to produce a record of the brewery history. This book provides a valuable insight into the brewing industry in Cork and the city’s rich legacy of trade and commerce.

The book will also act as a reference for historians working on the economic, social and commercial history of Cork, and indeed Ireland, over the last three centuries. The book was researched and written by Donal Ó’Drisceoil and Diarmuid Ó’Drisceoil, who in the course of their work, have made extensive use of the extensive brewery archives that were donated by HEINEKEN Ireland to the people of Cork and which are now held at the Cork City & County Archives in Blackpool. 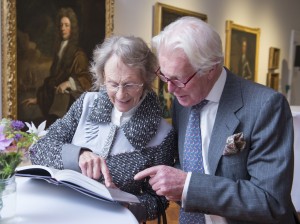 Beamish Family Descendants Richard Beamish from the UK & Valarie Cooper from Kildare pictured at The official launch of the HEINEKEN Ireland commissioned publication Beamish & Crawford. The History of an Irish Brewery , in the unique and appropriate setting of the Crawford Art Gallery.
Pictures Gerard McCarthy

According to Maggie Timoney (MD HEINEKEN Ireland): “HEINEKEN Ireland is very proud to have commissioned the publication of this book. Beamish & Crawford played a significant role in our city as did all who worked there throughout its 217 years. The words on these pages will immortalize Beamish & Crawford’s heritage and the very special role it played in the history of Cork“

Diarmuid O’Drisceoil, author: “It was an absolute privilege to work on this project, using nearly three centuries of archive material to tell the story of the brewery and the people who worked there. Cork has a rich brewing heritage and the Cork Porter Brewery of Beamish & Crawford on South Main Street was an integral part of that.”

Lord Mayor Cllr Chris O’Leary (Sinn Fein): “On behalf of the people of Cork and the generations of Cork families who worked in Beamish and Crawford, I am delighted to be associated with the HEINEKEN Ireland commissioned publication ‘Beamish & Crawford: The History of an Irish Brewery’. To have such a valuable archive at our disposal is a wonderful resource and unique record for future generations. Heartiest congratulations to all involved.”