Cork’s economy is recovering faster than rest of Ireland

A new economic analysis has shown that the South West has enjoyed a stronger rebound in employment than the national average. 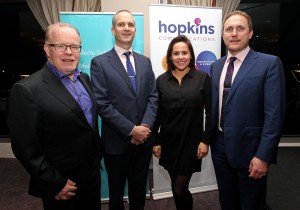 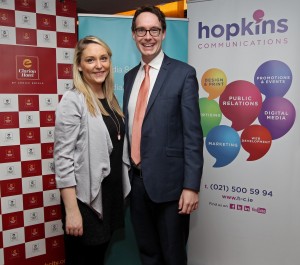 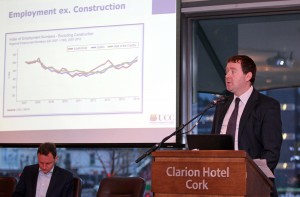 The Economic Briefing event, which was hosted by RTE Media Sales, Hopkins Communications and the Clarion Hotel, saw David Murphy, Business Editor at RTE News, chair an in-depth discussion on the extent of ‘The Recovery’ around the regions, with a special focus on Cork.

Bob Savage (Vice-President & MD at EMC Ireland) and Jim Woulfe (CEO at Dairygold), two of the region’s largest employers, participated in the discussion, with lively input from business leaders in the audience.

Seamus Coffey analysed the local trends, and the key findings were as follows:

• Employment: Employment nationally has grown 2.9% in the past 12 months – while the South-West Region (Cork & Kerry) has outstripped this at 3.3%, with increased employment of almost 10,000.

• Cars & Traffic: The national average new car sales registered is up 70% compared to 2013, while in Cork city and county the figure runs to 77%. Traffic volumes in and around Cork city have increased by approx.3.5% over the last two years, with Cork county road traffic seeing an increase of 5% over the same period.

The audience heard Bob Savage (Vice-President & MD at EMC Ireland) and Jim Woulfe (CEO at Dairygold) discuss the findings and drill down into the modus operandi of their respective companies in contributing to the local economy through their use of local workers and local suppliers who are key to their operations. Bob Savage commented: ‘As evidenced by the study’s findings, the economic recovery in Cork has been hastened by a strong economic base built on skilled employment, a pro-business entrepreneurial culture and investment by both Cork-based and multinational companies. EMC’s operations in Cork, and the Cork facility’s role in international business, depend heavily on Cork’s tight network of suppliers, its access to an educated workforce and its infrastructure. Our mutually beneficial relationship is driving growth in the region, and echoes the experiences of other Cork businesses.’

Jim Woulfe of Dairygold added: ‘These promising economic indicators for Cork and the surrounding counties augurs well for the future. Home to some of the finest agricultural and food production and processing plants in the world, Cork has a lot to be proud of. Following many decades of milk quota constraints, the region is now experiencing very significant dairy growth and forecasts indicate such growth will continue over the next five years. Dairy markets are cyclical and currently weak, however, by year end 2015 Dairygold will process a record 1.15 billion litres of milk, an increase of some 18%. With farm incomes generally spent locally, this upward trend will boost overall spend in the local rural economy without a doubt. Dairygold will continue with its commitment to investment in infrastructure in the region as is evidenced by our impressive new milk processing facilities in Mallow, along with the planned Kerrygold butter production facilities in Mitchelstown due to be commissioned in early 2016 and creating at least 100 jobs in the two north Cork towns. All this activity will feed on down to farm families and those we employ, with the myriad of small and large businesses whose services we commission on a daily basis also experiencing an upturn.’