The road between Bandon and Kilbrittain was one of the worst hit in West Cork by flood damage. Sections were worn away by the velocity of water. Since the weekend County Council crews have been out making temporay repairs.

“Many roads and bridges throughout West Cork have been damaged and these are presently being reviewed by council engineers. Council staff are working tirelessly to repair as many roads as possible to make them passable. A full programme of works will be prepared and undertaken by the council and central Government funding will be required to restore the roads to normal condition”

Cllr Coleman confirmed that the clean up bill for Cork County Council after storm charlie will run close to €1 million. This excludes the cost of any road repairs.

The road in Kilbrittain itself is now open, and a Council source told TheCork.ie that the full road to Bandon will be open for access to the village of Kilbrittain by Thursday . This will be a short-term measure before full resurfacing will be undertaken. 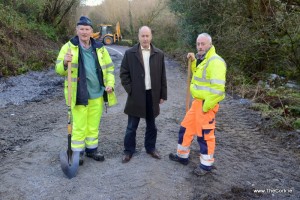 Pictured working on the Bandon to Killbritain road which remains impassable after the recent floods were Council workers Dan Collins and Eugene McSweeney with Alan Coleman MCC. Picture Denis Boyle