Pictured at the launch of Beingmate Creation+ at Cork City Hall, the Chinese Ambassador to Ireland, His Excellency Xu Jianguo

The product, which is produced in Charleville, Co. Cork, in partnership with Kerry, was officially launched by the Lord Mayor of Cork, Cllr. Chris O’Leary at a ceremony in Cork City Hall. The event was attended by the Chinese Ambassador, His Excellency Xu Jianguo, together with representatives from the Chinese Embassy, Bord Bia, and Enterprise Ireland.

Headquartered in Hangzhou, China, Beingmate set up its first overseas subsidiary in Cork in 2013, following the signing of a memorandum of global strategic partnership with Kerry in 2012. This agreement to supply high quality infant milk formula led to a number of Beingmate’s products being produced in Ireland for the Chinese market. 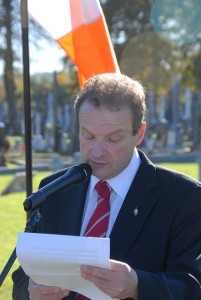 The Lord Mayor of Cork, Cllr. Chris O’Leary, expressed his delight at the launch and extended a warm welcome to the visiting Chinese delegation, “I’m thrilled to be able to launch Beingmate’s first European-specific product. There are significant economic, education and cultural links between Cork and China and it is positive to see these strong relationships nurture business development across both regions.”

Speaking at the launch, Deputy Mayor of the County of Cork, Cllr. Frank O’Flynn, said, “Ireland is an ideal location for agricultural excellence with our mild temperature and abundant rainfall. As a certified member of ‘Origin Green’ – Ireland’s Sustainability Programme, Beingmate has ensured that Creation+ embodies the ‘Origin Green’ commitment to serve local communities and protect the extraordinarily rich natural resources that our country enjoys.”

Also speaking at the launch, the Chinese Ambassador to Ireland, His Excellency Xu Jianguo said, “I am delighted to be here to help strengthen the existing trade connections between China and Ireland and now with our partners in Cork. Ireland is the second-largest exporter of infant formula to China and so it is important we are able to maintain high standards around food safety and innovation.”

Kerry has been one of the top suppliers to Beingmate for many years. Jianglai Weng, Head of Business Development at Beingmate Ireland, said this partnership has been an integral part of the globalisation of the business. “Kerry is a world leading food processor and we have forged a strong relationship over the last decade. We plan to continue this partnership and collaborate in areas such as research and development, ingredients supply and food safety management,” said Mr. Weng.

Mr. John Reilly, Vice President of Kerry Ingredients, said, “We are confident that there is a market for this Irish product. Creation+ has been developed specifically for the European market, designed in the UK and produced in Ireland.”

The Creation+ is infant milk formula range is aimed at babies and toddlers aged 0-3 years. There are three products in the range, ‘First Infant Milk’ for newborn to 6 months, ‘Follow-On Milk’ for babies aged 6-12 months and ‘Toddler Milk’ for children aged 1-3 years. It is available to buy from online retailers such as Amazon and select retail stores.

Beingmate has more than 1,000 authorised stores in China and is fast becoming a leading brand for Chinese consumers. Beingmate had revenues of approximately €640 million in 2015.