Cork Summer show programme hottingup to be best in years 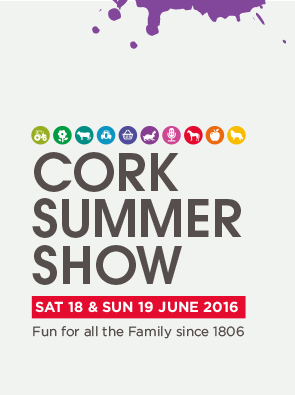 The Munster Agricultural Society (MAS) this week announced a number of exciting new additions to the 2016 Cork Summer Show programme of events. Cork singer/songwriter John Spillane was added to this year’s music and entertainment bill and will perform alongside The Frank & Walters and Lord of Strutt among others. It was also announced that celebrity physicians Dr Pixie McKenna and Dr Phil Kieran will bring their RTE One series “You Should Really See a Doctor” to the Cork Summer Show on Saturday 18 June.

“The Cork Summer Show has a great reputation for entertaining the masses – and this year is going to be the biggest show yet. We are absolutely delighted to announce that John Spillane has been added to the music and entertainment bill. He is a brilliant Cork musician and I have no doubt that he will put on a great show,” said Gerard Murphy, Chairman, Munster Agricultural Society.

Dr Pixie McKenna and Dr Phil Kieran will host a free pop-up clinic at the Cork Summer Show on Saturday 18 June for their RTÉ One Television Series “You Should Really See a Doctor”. The doctors will offer on-the-spot consultations and health checks and are keen to examine the symptoms and ailments that are bothering the nation – lumps, bumps, pains, aches, tingling and even toilet troubles.

“I am very excited to announce that Dr Pixie McKenna and Dr Phil Kieran will be on site at the Cork Summer Show on Saturday, 18 June filming for their popularTV show “You Should Really See a Doctor”. They are particularly interested in hearing in advance from people who have been avoiding the doctor or who have researched their symptoms online, but would like an experienced medical professional’s advice,” he added.

Anyone wishing to apply, or to obtain further information regarding the tv series “You Should Really See a Doctor” can email doctor@indiepics.ie.

With a family-friendly mix of agriculture, food, music, home, garden, crafts, equipment and entertainment for all ages the show will take place from 9am to 6pm each day on 18 and 19 June 2016 at the Showgrounds in Curraheen, Co. Cork.

“We have improved our parking structures at the Showgrounds this year providing a more efficient service for those attending. There is also a free shuttle bus service from Ballincollig Shopping Centre, Black Ash Park & Ride and Curraheen Park Greyhound Stadium,” added Gerard Murphy.