With almost 10,000 participants running (Monday), the Irish Examiner Cork City Marathon 2016 celebrated ten years of marathon running in Cork city. It was a record-breaking event when Damien Coleman from Blackrock GAA Club beat the previously set Guinness World Record, by running a marathon while soloing with a hurley and sliotar for the entire race in 4 hours and 28 minutes. Damien had to beat the previous record of 6 hours and was running for Cork Simon Community and Blackrock GAA Club, fondly known as “the Rockies”. 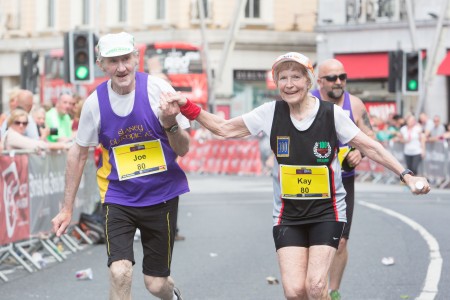 Among the incredible achievements recorded at the Cork City Marathon were 80 year old couple from Wexford, Joe and Kay O’Regan who crossed the line hand in hand after 5 hours, 25 minutes.

Amost 10,000 people took part in the Cork City Marathon this year ensuring it’s place as one of the major events in the Irish sporting calendar. The Cork City Marathon has been recognised for its inclusivity, ensuring that young and old and those with varying degrees of challenges are included in the marathon and each year the event attracts many international and national entrants.

Alex O’Shea, who broke the Guinness World Record in 2014 when he ran the Cork City Marathon in full fire fighting attire, finished the marathon in eleventh place today with a time of 2 hours, 48 minutes and 59 seconds.

Prizes were presented to a number of relay teams as well as the half marathon runners, including weekend breaks sponsored by the River Lee Hotel.