Fir, Marú agus Grá is a compelling but dark docu-drama series that offers a startling, compelling and uncompromising look at the court cases of six men for the murder of their intimate partners. Featuring interviews with the investigative team, court reporters and journalists who covered the cases, the story of each case will be pieced together through reconstructions of the main pieces of evidence that were presented at each trial by the State Prosecution.

The programme began last week where Episode 1 examined the trial of Laois man.

Tonight, Episode 2 looks at a Midleton death. Catherine Smart’s body was found in her home on Easter Sunday 2010 in Midleton, Co. Cork. Arrested for the first time 38 days after the death, a man stood trial in relation to the death in 2011. 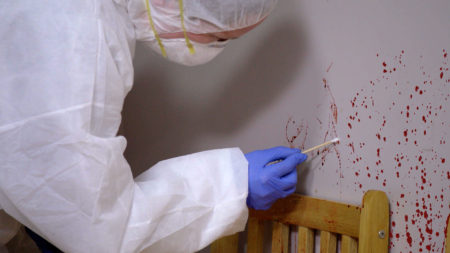 Photo of scene from a scene of the 6 part crime documentary. The series looks at separate crimes across Ireland