What is price of place?
IPB Pride of Place is an all-island (North and South) competition that acknowledges the work that communities are doing all over the island of Ireland.

Where does the IPB name come from?
IPD is the name of an insurance company.

Representatives from five very different Communities are preparing for the Pride of Place Awards Ceremony, which takes place on Saturday in Letterkenny, Co. Donegal.

The County Cork nominations are:-

The purpose of the Pride of Place Competition is to acknowledge the immense work undertaken by communities. Judging for this prestigious, All-Island Competition took place in August over the course of three days where representatives from all five locations demonstrated their commitment and contribution to the growth of vibrant, viable communities in their areas. 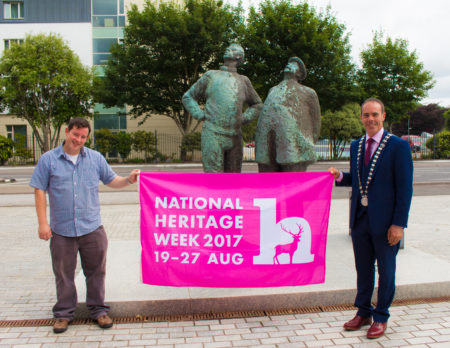 The current County Mayor has had a busy year. Picture above is Conor Neligan, Heritage Officer Cork Co Co, along with Mayor Cllr Declan Hurley in relation to a previous event. Photographer: Kevin Nolan

Mayor of the County of Cork, Cllr Declan Hurley spoke of how impressed he was with all five areas, “I visited all five areas with the Judges during the Summer… and I will be in Donegal to wish them all the best”.