Cork’s ‘Best Young Entrepreneurs’ were named at an awards ceremony hosted by Cork’s three Local Enterprise Offices (LEOs) on Thursday, December 14th in Republic of Work, Cork City. The winners were chosen from 43 finalists, shortlisted from almost 200 applicants in the competition which was launched this autumn by the LEOs as part of the nationwide search to find ‘Ireland’s Best Young Entrepreneur’ (IBYE). 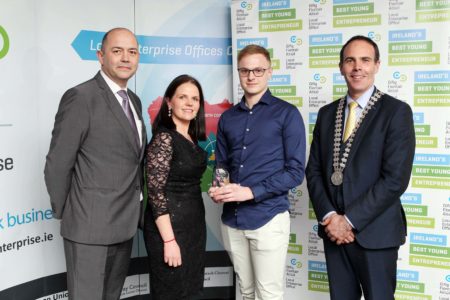 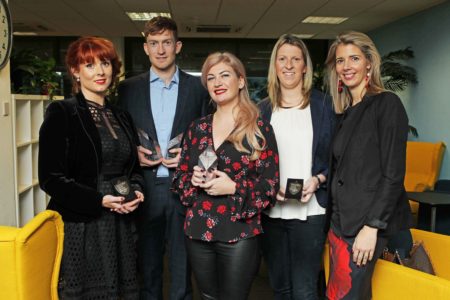 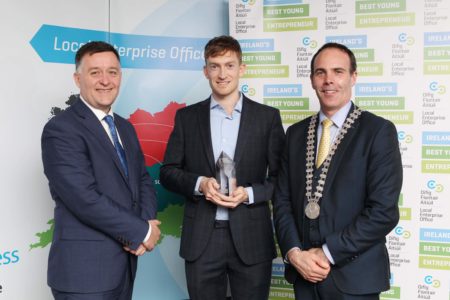 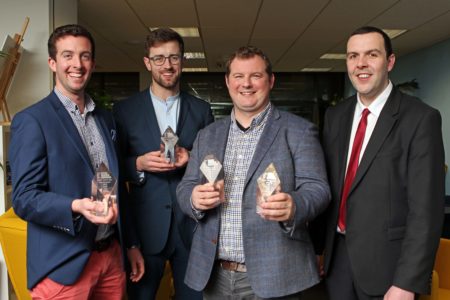 The campaign saw the three LEOs (Cork City, South Cork, and Cork North and West) encourage young entrepreneurs from all over the city and county to enter and be in with a chance to win a share of the €150,000 investment fund available. This is the fourth year of the competition open to individuals aged 18 to 35. The final 43 young entrepreneurs attended the LEO’s intensive two day Business Boot Camp on 17th & 18th November last to focus on their business plans and how to get ready for delivering that “perfect pitch” ahead of the judging stage of the competition with the county assessment panel.

Finalists were judged in three categories following the presentation of their business plan to judging panels for each of the three Cork LEOs. The three categories were ‘Best New Idea’, ‘Best Start-Up Business’ (trading up to 18 months), and ‘Best Established Business’ (trading over 18 months). The LEO winner in each category receives significant investment in their business, with one overall winner in each Cork LEO receiving the accolade of ‘Best Young Entrepreneur’.

In the LEO Cork City competition, the Best New Idea category was won by Joe Perrott of Remote Signals who is based in the Rubicon Centre, CIT, and received an investment of €7,000 in his company.  Remote Signals is developing a hardware and software solutions which allow almost anything to be easily connected to the internet. The runner up in this category, picking up €3,000 was Aaron Collins of My Sitter who is also based in the Rubicon Centre, CIT.

Tom Cotter, based in Republic of Work, South Mall, founder of Rash ‘R Vests Ltd received an investment of €15,000 in the Best Start-Up Business category. Rash ‘R is a water sports brand positioning itself to become the market leader that offers a technical t-shirt that can be worn on, in, or around the water. The runner up in this category, picking up €5,000 was Sean O’Tuama, founder of Firemole, based in Bishopstown.

The title of ‘Best Established Business’, and an investment of €15,000, went to Paul Moore of Rebel Chilli which is based in Wilton, and makes a range of fresh chilli sauces by hand for both retail and the food service sector in Ireland and internationally. The runner up in this category, picking up €5,000 was Alex Chernenko of Translit, from Cork City.

Joe Perrott also walked away with the title of ‘Best Young Entrepreneur’ for the Cork City.

In the LEO South Cork competition, the Best New Idea category was won by Martin O’Flynn who received €7,000 investment in his company, Systemic Mind Ltd, which is developing a state-of-the-art software solution that will guide anyone from ‘goal setting’ to ‘goal achieving’. The runner up in this category, picking up €3,000 was Tara Zuluaga, founder of Gut Instinct from Cobh.

Conor Lyden of Trustap, from Carrigaline, received €15,000 investment in the Best Start-Up Business category. Trustap is a transaction platform that acts as a safety net for customers when they want to buy or sell online. The runner up in this category, picking up €5,000 was Anne Marie O’Connell of The School Directory from Glanmire.

The title of ‘Best Established Business’, and €15,000 investment, went to Cliona Sweeney O’Sullivan from Ladysbridge, founder of Beautique Cork , who is a nail artist and master educator for gelish courses in Cork. The runner up in this category, picking up €5,000 was Rachel McCarthy of Ina McCarthy Flowers in Midleton.

Conor Lyden also walked away with the title of ‘Best Young Entrepreneur’ for the Local Enterprise Office South Cork.

In the Cork North and West competition, the Best New Idea category was won by Oliver Smith from Skibbereen, who received €7,000 investment in his company, Digedu, which is an online school of technology that helps businesses grow their revenue by continuous professional development in technological skills. The runner up in this category, picking up €3,000 was Grainne Dwyer, also from Skibbereen, with Stori Creative.

James Gale from Innishannon, founder of Stamp Owl received €15,000 investment in the Best Start-Up Business category.  Stamp Owl is a mobile app that lets users create and send personalised postcards. The runner up in this category, picking up €5,000, was Aidan Kiely of Swoon Frozen Yogurts from Mallow.

The title of ‘Best Established Business’, and €15,000 investment, went to Emily Ahern from Mallow with her business Evolve Therapy which is a specialist paediatric clinic that provides evidence-based therapy for children from 0-18 years of age.

James Gale also walked away with the title of ‘Best Young Entrepreneur’ for the Cork North and West.

The county winners will now proceed to the regionals final in January, and following that 24 contenders (three from each region nationally – one in each category) will be selected to compete for the national title of Ireland’s Best Young Entrepreneur in the European Headquarters of Google in Dublin on 4th March. A further €100,000 investment fund will be available to invest in the winners of the three categories at the national final, one of which will also be named as “Ireland’s Best Young Entrepreneur.

Speaking at the county final, Adrienne Rodgers, Head of Enterprise, Local Enterprise Office Cork City said “It’s fantastic and very encouraging to see so many young entrepreneurs here tonight with innovative ideas and businesses. IBYE is a great springboard for young entrepreneurs here locally, connecting them to their Local Enterprise Office who can help them to start or expand a business. Already, those who entered the competition this year have gained lots of valuable knowledge and skills to help them with their business going forward, the future is bright for both youth entrepreneurship and job creation in the region.”

Further details on the competition and supports available to young entrepreneurs are available through www.localenterprise.ie and at www.ibye.ie. To follow the progress of Cork’s winners, check out @IBYECork on Twitter and IBYE Cork on Facebook.