Tourism Ireland board meets in Cork

The Montenotte Hotel in Cork was the venue for the February board meeting of Tourism Ireland, which took place today (Thursday, 8 February). The board members took the opportunity to meet with local tourism operators prior to the meeting, to discuss the upcoming 2018 tourism season and the extensive programme of promotions which Tourism Ireland is undertaking to highlight Cork city and county, the Wild Atlantic Way, Ireland’s Ancient East and the island of Ireland around the world this year.

“We were delighted to be in Cork for this month’s board meeting and to have the chance to meet with representatives of the local tourism industry and to hear directly how their business is doing,” said Shane Clarke, Tourism Ireland’s Director of Corporate Services & Policy, speaking after the board meeting. “It also afforded us the opportunity to discuss the extensive promotional programme which Tourism Ireland is undertaking around the world this year, to build on the success of 2017 and continue to grow overseas visitor numbers to the island of Ireland in 2018. Priority markets are the United States, Great Britain, Germany and France, but our promotions are also continuing in other key markets across the world – including Northern Europe, Southern Europe, Australia and New Zealand, as well as new and emerging markets like China and India.”

Cork city and county, its spectacular scenery, visitor attractions and events, as well as many other aspects of this part of Ireland, feature prominently in Tourism Ireland’s promotions around the world. Tourism Ireland profiles Cork, the Wild Atlantic Way and Ireland’s Ancient East extensively on its global suite of websites, Ireland.com, which attracted around 19.3 million visitors in 2017. Cork is also highlighted through Tourism Ireland’s social media platforms – to its 4.16 million active Facebook fans and 476,000 followers on Twitter.

In 2017, Tourism Ireland helped generate almost €47 million worth of positive publicity for Cork city and county in key markets around the world, through press releases, press visits, e-newsletters and various media events. 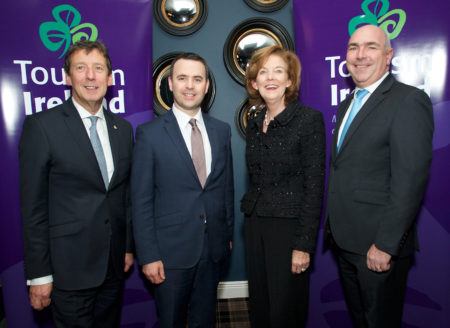