It may well have been the first time that the Men’s Shed in Allihies hosted a dragon, certainly one from North Dublin. The dragon in question is an imaginary one, created by Cork-born illustrator Sheena Dempsey and Jane Landy (formerly a demented mammy) from Skerries.

The character, named “Gringer the Whinger” was invented 22 years ago by Jane, following a visit to a library with her then 3 year old daughter Aisling. Two years ago Jane located Sheena on the Illustrators Ireland website and asked her to illustrate a picture book based on the antics of Gringer. Printed by Turners of Longford, this beautiful picture book won Sheena a Commendation Award at the IDI Institute of Design of Ireland last year. It is now available in bookshops throughout Ireland and Sheena and Jane are having lots of fun running workshops based on the book for children all over the country. Their latest invitation was to the Allihies Inspires Creative Festival, organised by Dee Collins. This is the first year of the festival and it was a great honour for Sheena and Jane to be invited and a lovely opportunity for them to sample the delights of West Cork in glorious sunshine.

At eleven o’clock about 15 boys and girls assembled in the Men’s Shed and heard all about how useful Gringer had been to Jane, back in her childrearing days, providing endless distraction for her children plus an opportunity for Jane to practice her dragon voices. 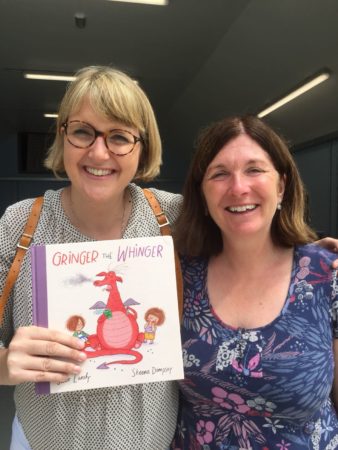 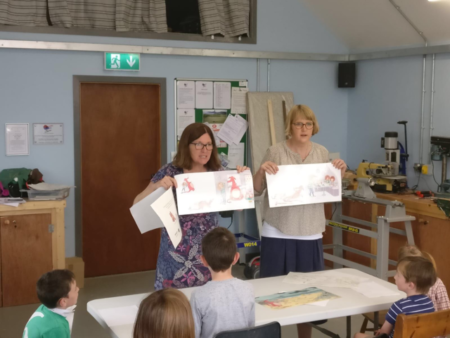 The children were then invited to produce their own illustration of Gringer, after which Sheena drew a sketch of him, explaining her thinking as she went along. Sheena then handed out all her original pencil and paper sketches for the book which made the young participants gasp in wonder and admiration. All the steps of producing the book from cover size to paper thickness were then related by Jane. She described her excitement on the day when the finished books were delivered and gave each child an opportunity to examine a book in detail.

Sheena and Jane then read from the rhyming book together as the children turned the pages. Everyone was then replenished with an excellent round of refreshments served by David Dudley.

‘What a brilliant weekend in Allihies!’ said Sheena. ‘Beautiful weather, great atmosphere, company and events. Jane and I loved bringing “Gringer the Whinger” to the Men’s Shed!’