German Concert in City Hall will fundraise for Cope Foundation

Junge Sinfonie Köln will perform a special concert in aid of Cope Foundation on Wednesday 17th October 2018 in the Concert Hall, Cork City Hall. The concert will be attended by German Ambassador to Ireland; Ambassador Deike Potzel who is looking forward to making a return to Cork. On her last visit to Cork, Ambassador Potzel was very impressed by the potential to further grow trade and tourism links between Cork and Germany. 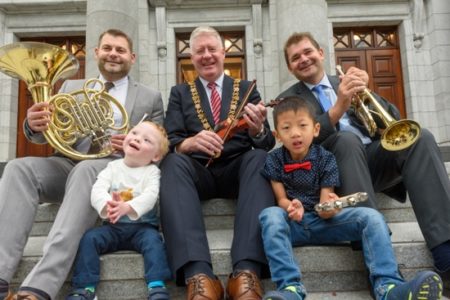 The visit from the Cologne group is to mark the 30th Anniversary of the Cork-Cologne Twinning and the concert is being organised in association with Cork City Council. Cork City and Cologne are twinned cities celebrating 30 years of friendship and collaboration this year. Since the link between these two beautiful cities was officially formed in 1988, the exchange has gone from strength to strength especially in the fields of education, commerce, training, music and athletics.

Cllr. Mick Finn, Lord Mayor of Cork officially launched the concert at City Hall and commented “We’re delighted to be hosting this event which showcases the strong and ever strengthening relationship between Cork and Cologne. Through our collaboration in the fields of sport, arts and education, the citizens of both cities continue to benefit from our twinning.”

The 75 piece orchestra celebrated its 50th anniversary in 2016, and in the course of those five decades it has developed from a chamber music circle to a large symphonic orchestra, which through all its various activities has achieved a very significant degree of recognition.

Sean Abbott, Chief Executive at Cope Foundation said “We feel privileged to be chosen by Junge Sinfonie Köln as their charity of choice for this special and unique concert in City Hall. It promises to be a great night of music and friendship and we are looking forward to giving Junge Sinfonie Köln a warm Cork welcome when they visit in October.

We are delighted to be joined by our friends at Mater Private Hospital Cork who are the main event sponsors. As their Charity Partner for 2018, our link with the Mater Private Hospital Cork has already generated significant funds, friendship and valuable support for our work throughout the year and we are pleased to have them on board for this event also. Events like this are integral to our fundraising efforts at Cope Foundation and everyone here is so excited about the performance.”

This concert, titled Echte Fründe – which means ‘real friends’ in Kölsch, the local dialect in Cologne – is anticipated to be a sell-out performance with people coming together to welcome and enjoy the incredibly talented Junge Sinfonie Köln and to support Cope Foundation, one of Cork’s most established charities.