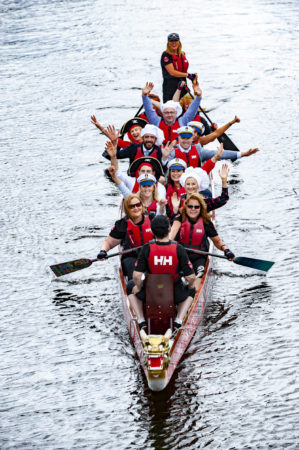 The Gourmet Trail, which is part of the Murphy’s Cork Oyster and Seafood Festival takes place from 20th to 22nd of September.
The trail was launched with the help of crew members from the Cork Dragons and attended by representatives from The Met at the Metropole Hotel; Tequila Jacks; Dwyers of Cork; Electric on the South Mall; the Cornstore and the Oyster Tavern.
Pic: Brian Lougheed

The day will start at noon with a drinks reception at the four star Metropole Hotel, before taking off on a culinary tour of Cork, taking in some of Cork’s best restaurants. Some of the Cork restaurants taking part include: The Met, Cask, Dwyers of Cork, Greenes, The Oyster Tavern, Electric, Soho, Tequila Jacks, The New Yorker Bar & Bistro, Olivo at the Cork Airport Hotel, the Cornstore, Gallaghers the Bodega and Arthur Maynes. The trail will last until approximately 5.30pm and then guests will return to the Metropole Hotel for the Gourmet Trail after party with DJ till 8pm. On successful completion of the trail, guests will be awarded a goody bag. The theme of the trail is maritime and there will be prizes for most seafaring hat.

Also that evening the Metropole will host a very special music extravaganza as the Frank and Walters take to the stage.

Sean McCarthy, owner of Tequila Jacks Restaurant said: “This event always proves hugely popular every year and each year it is a sell-out. It really shows how we can all work together in Cork to showcase our fantastic city and all that it has to offer. The Gourmet Trail is a great way to sample what’s on offer from restaurants around Cork and is a fantastic opportunity to show off menus.”

The Gourmet Trail is part of the Murphy’s Cork Oyster and Seafood Festival which is taking place from 20th to 22nd of September.

Tickets for the Gourmet Trail are currently on sale on Eventbrite at €75 per person.