The Fianna Fáil ticket for the Cork East constituency has been completed following the addition of Cllr James O’Connor (who has the memorable domain ‘askoconnor.com’)

The decision was taken following a meeting of the Party’s National Constituencies Committee. 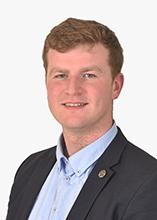 Cllr. O’Connor was elected to Cork County Council in the Local Elections earlier this year. James grew up on a dairy farm near Youghal and is a student of Business, Economics and Social Studies at Trinity College Dublin.

Following his addition, Cllr O’Connor – whose twitter handle is jamesoconnorTCD (in reference to his alma mater) – said, “I am hugely honoured to be added to the ticket in Cork East and am very much looking forward to contesting the General Election for Fianna Fáil.

“I believe it’s important to encourage more young people into politics, so that they can be fully represented. Access to public transport across Cork County is a huge issue, and over the past 4 months I have been actively engaging with the relevant authorities and stakeholders to improve the situation for commuters in East Cork”, said Cllr. O’Connor.

“Encouraging more economic activity in the area is also a major priority. I want to work on policies that will support small businesses and increase job opportunities in Youghal.

“Issues like mental health and wellness are not being properly addressed and I want to work with my Party colleagues to move them up the political agenda.

“Fianna Fáil has an extremely strong General Election ticket in myself and Kevin O’Keeffe and I am committed to working together to ensure that we return two seats come polling day”.