Brigadier General Brian Cleary has now been appointed as General Officer Commanding 1 Brigade based in Collins Barracks, Cork City. This follows his recent appointment as Commander, Joint Task Force, which was established on the 19th Mar 2020 in response to Ireland’s COVID-19 threat.

A native of Athlone, Co. Westmeath, Brigadier General Cleary joined the Permanent Defence Forces in 1981 as a member of the 58th Cadet Class and was commissioned as an Officer into the Artillery Corps in 1983. He currently resides in Kildare. 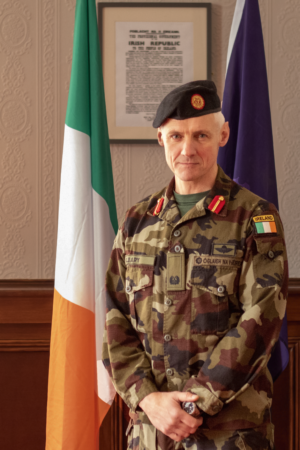 Brigadier General Cleary is married to Martina and they have four children. His interests include reading, sports, outdoor pursuits, triathlon and choral singing.

The 1st Brigade is an all arms Brigade consisting of combat, combat support and combat service support elements. Such elements include units of Infantry, Artillery, Cavalry, Engineers, Communications and Transport. These units are spread throughout the Brigades’ designated area of territorial responsibility.

The 1st Brigade is responsible for military operations in the south of the country. Its area of responsibility includes the counties of Carlow, Laois, Offaly, Kilkenny, Wexford, Waterford, Cork, Kerry, Limerick, Clare, Tipperary and Galway. The Brigade Headquarters is located in Collins Barracks, Cork.

When not involved in operations personnel are in constant training to maintain current skills, become proficient with new equipment and in particular to be able to adapt to a constantly changing environment.

There are several training areas within the Brigade area; Kilworth Camp in North Cork, Bere island in West Cork, Fort Davis in Cork Harbour, and Carnagh Camp in Roscommon.