On Tuesday, February 16th at 7pm the latest in a series of online talks by Engineer’s Ireland will be available: The History and Rehabilitation of Daly’s Bridge (The Shakey Bridge) presented by Michael Minehane, Chartered Principal Engineer at RPS and Kieran McCarthy, noted local Cork historian. “As part of the Cork Regional 80th Anniversary celebrations, we are delighted to host this presentation on the history and refurbishment of the iconic “Shakey” Bridge which was originally built under the stewardship of the then City Engineer, SW Farrington, who was also the first Chair of the Cork Region of Engineers Ireland” says Ronan Keane, current Chair. The presentation will outline the social and economic context of the original construction, first opened in 1927, replacing an earlier ferry crossing at the same location. It remains the only suspension bridge in Cork City and is the only surviving bridge of its type in Ireland. 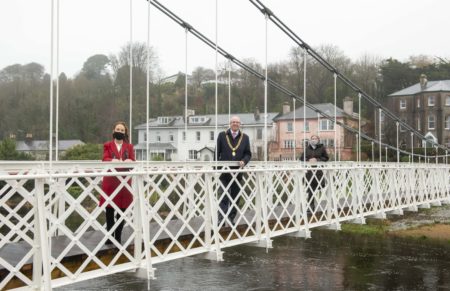 Michael Minehane says, “I will be giving the second part of the talk which will outline the recent rehabilitation of the bridge which re-opened in December 2020, including the special inspection and structural assessment, site investigations and material testing, rehabilitation works, approach to conservation, structural dynamics and aspects of design and construction.”

Kieran McCarthy will talk about the history of the bridge “of all the bridges in the city centre island, one can argue that Daly’s Bridge is the one which holds the fascination of the public the most. The removal of the main body of the bridge to deep clean it off site caused a large tinge of public sadness. Its return to the Banks of the Lee in the spring of 2020 heralded hope, and almost a sense that a valued family member had returned. The bridge’s essence has transcended time from a physical bridging point to one of playfulness, one of fun, and one whose shakiness is a key part of Cork’s Cultural Heritage.”

The History & Rehabilitation of Daly’s (Shakey) Bridge on Tuesday, 16th February at 7pm online via zoom, It’s a free event and all are welcome: https://zoom.us/webinar/register/WN_7M2J_bAKQsGsGxKCD4QBaQ