FARMERS! The Department of Agriculture wants to help you get your potatoes into Irish chippers

It’s not every day that you see a Government Department promoting fast food (chippers), but the goal here is to help Irish potato growers. It just happens that chippers are the middleman. Ireland imports 64,000 tonnes of potatoes from the UK each year (CSO), the majority of which are used by chip shop owners, we should be using our own potatoes!

The Minister of State at the Department of Agriculture, Food and the Marine, Senator Pippa Hackett has welcomed a new initiative which is aimed at helping Irish potato growers get their produce into Irish chip shops.

Ireland, despite being a nation famous for potatoes and growing circa 300,000 tonnes per annum for domestic consumption, imports 80,000 tonnes, or €45 million worth, of potatoes per annum, with 64,000 (€33 million) tonnes coming from the UK (source: CSO 2019). The majority of these fresh potato imports are used by chip shop owners. There are currently over 530 independent chip shops in Ireland (source: Euromonitor).

“A storage facility which maintains the correct sugar and starch levels in potatoes, as well as keeping them fresh beyond the winter period, is absolutely key to producing the quality that is needed in good chipping potatoes. So the development of such a facility, along with the official opening today of Ireland’s first dedicated potato packer and distributor focusing on the exclusive growing of potatoes for chipping, is a real opportunity for Irish growers to supply home-grown potatoes for the Irish chip shop market.

Growing chipping potatoes is a specialist operation, and the market for them is valued at approximately €20 million per year. I think the Irish consumer, given the choice , will really appreciate businesses that support local growers. This is a welcome development which will shorten the supply chain and bring plant bio security benefits, making it a significant step forward for the sector. I would like to congratulate all involved and I look forward to seeing how the initiative progresses over the coming years.” 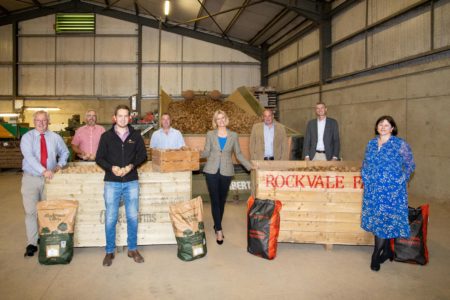 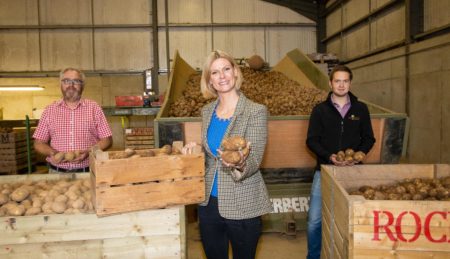 Minister of State at the Department of Agriculture, Food and the Marine, Pippa Hackett has called on the Irish potato industry to support a new initiative to increase the volume of home-grown potatoes used in Ireland’s 530 independent chip shops. Ireland imports 64,000 tonnes of potatoes from the UK each year (CSO), the majority of which are used by chip shop owners.
Picture: Alison Miles/OSM PHOTO 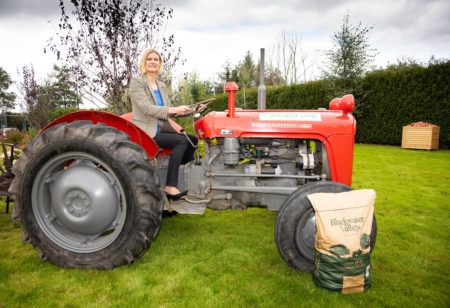 Minister of State at the Department of Agriculture, Food and the Marine, Pippa Hackett has called on the Irish potato industry to support a new initiative to increase the volume of home-grown potatoes used in Ireland’s 530 independent chip shops.
Picture: Alison Miles/OSM PHOTO

In 2019, as part of the ‘chipping potato’ project, Bord Bia undertook consumer and trade research to understand both the Irish consumer and independent chip shop owner’s perspective. The research revealed that over 66% of Irish consumers (2 in 3) incorrectly assume that the potatoes used to make the majority of chipper chips come from Ireland. Approximately 3 in 4 are likely to support a chipper that sources locally grown potatoes, while 70% would consider it useful to know the country of origin of the potatoes used in their usual chipper through signage or recognised marks. The texture of the chips, the reputation of chipper and the appearance of chips were cited as the most important factors in making great chipper chips.

From the trade side, Lorcan Bourke, Fresh Produce and Potato Manager, Bord Bia was encouraged by the research findings. “Some chip shop owners have already successfully put a local supply chain relationship in place, demonstrating that Irish growers can grow chipping potatoes of excellent quality. Many of the chip shop owners working with locally grown potatoes saw local supply as a great advantage in their communications with customers. I firmly believe it is a win-win situation and would encourage any grower or chip shop owner willing to support the initiative to get in touch or visit our webpage (bordbia.ie/sourcechips) with a view to establishing new trading relationships.”