Things to do in Cork

Today, Cork Opera House made its first full-season announcement since its re-opening with a stellar line-up that is packed with a variety sure to please and delight Cork audiences and beyond.

As the iconic Leeside venue emerges from two years of pandemic-enforced rescheduling and cancellations, the summer programme marks something of a return to business as usual for the Opera House. Featuring a host of familiar favourites in music, comedy and family entertainment, the summer programme also includes some exciting new work produced by the Opera House right here in Cork. 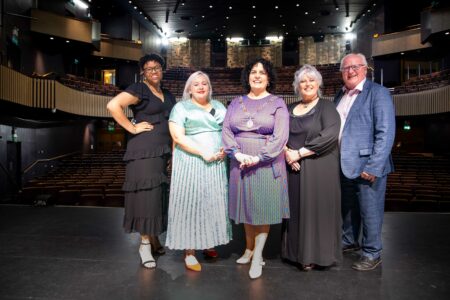 Speaking at the launch, CEO Eibhlín Gleeson said; “We are so excited to announce this programme which has been two years in the making. The programme includes some shows we were hoping to present in 2020 while others are completely fresh new projects born during the quiet of the pandemic. We are relieved and honoured to be in a position to bring you a selection of the finest arts and entertainment you’ll see in the city this summer!”

With a jam-packed June kicking off the season, families can look forward to the return of Peppa Pig’s Best Day Ever (11 & 12 June) while comedy lovers are assured of a good laugh with comedians Nina Conti (9 June) and Jason Manford (17 June). Irish National Opera presents the tale of two queens – Donizetti’s Maria Stuarda (15 & 16 June) – which kicks off the opera programme for the year.

In July, John O Brien and Cork Opera House in association with The Everyman Theatre, will present Morrígan – a new opera created by musician and composer John O’Brien and writer Éadaoin O’Donoghue. Set in Iron Age Ireland and Scotland, Morrígan promises a vivid spectacle alongside a renowned Irish and international operatic cast conducted by Conor Palliser.

“Funded by the Arts Council’s Opera Project Award, Morrígan has provided the perfect opportunity for Cork Opera House to present full-scale, homegrown opera on our stage. We are delighted to lend our stage to this project which puts local artists front and centre” explains the CEO.

Another highlight in July is the Summer Opera Gala (9 July). Curated in association with Irish National Opera, this special gala event features the Cork Opera House Cara O’Sullivan Associate Artists: Emma Nash, Rachel Crash, Gavin Ring and Rory Musgrave, together with the Cork Opera House Concert Orchestra. This concert will feature many beloved arias and will be free of charge to the public and serves as a gift to the city in Cara O’Sullivan’s name.

In August, The Cork Proms will make a welcome return, comprising three different shows featuring the Cork Opera House Concert Orchestra, playing the music of Beethoven, The Beatles and Broadway. Conducted in turns by John O’Brien, Cathal Synott and Elaine Kelly, The Cork Proms celebrates Cork as a musical city and gives audiences the opportunity to engage with some of the best music ever written.

In September, Irish National Opera and Landmark Productions return to Cork with The First Child – a piece written by Donnacha Dennehy and Enda Walsh and featuring operatic sensations Niamh O’Sullivan and Sarah Shine and more.

And finally, much to everyone’s delight, the Opera House also announced Sleeping Beauty as their 2022 Christmas Panto, with tickets due to go on sale to the public on 1 July, 2022.