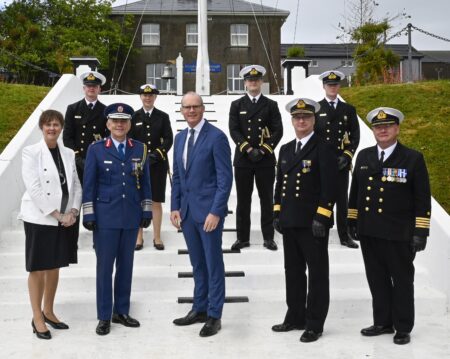 It was a very important and proud day for the members of the 60th Naval Service Cadet Class as they were awarded their Commissions. The 4 Cadets of the 60th Naval Cadet Class have successfully completed 22 months of intensive training preparing them to become Commissioned Officers. They will continue their training and education to prepare them for qualification as Naval Watch keepers on board NS warships. This Specialised training will include Navigation, Ship Handling, Above Water Warfare and Gunnery, Seamanship, Communications, Leadership and Management.

The class included natives of Cork, Kildare, Meath and Tipperary. One Cadet is the Daughter of the Assistant Chief of Staff, Brigadier General Rossa Mulchahy whilst another comes from a long line of serving and retired Servicemen.