Friday, July 22, 2022: The Minister for Foreign Affairs & Minister for Defence Simon Coveney TD has today officially opened the expanded endoscopy unit in Bon Secours Hospital Cork, following the refurbishment of the existing area and the addition of a pre-procedure area and a 4th Endoscopy room.

The expansion means the hospital now has one of the largest private endoscopy offerings in Ireland, enabling its multidisciplinary team to treat an additional 4,000 patients annually with a wider range of endoscopic procedures.

Speaking at the opening, Minister Simon Coveney said: “Bon Secours Cork continues to break new ground in terms of innovation and excellence in healthcare. The expansion of its endoscopy services is another important milestone in the ongoing development of healthcare for patients living in the region. Bon Secours Health System’s continued investment in world-class facilities and its expansion of vital services across Ireland are to be commended, and I congratulate them for their ongoing commitment to technologically-advanced medical care.”

Bon Secours Health System Group Chief Executive Bill Maher added: “The expansion of our endoscopic department enables Bon Secours Hospital Cork to treat even more patients in a timely and effective manner, and I am very pleased that Minister Simon Coveney could join us on another landmark day for this hospital. These enhanced endoscopic services follow the opening of our €10 million operating theatres here in Cork by Taoiseach Micheál Martin in January, and further enables us to meet our patients’ needs by providing increasing access to vital, advanced medical care. Covid-19 continues to impose significant pressures on healthcare services across Ireland, but Bon Secours Health System remains unrivalled in the quality of our medical service provision, combining the latest medical technologies and approaches with compassionate and personalised medical care.” 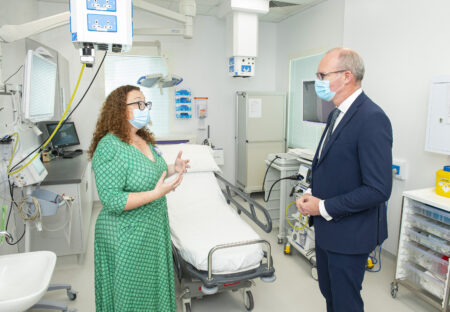 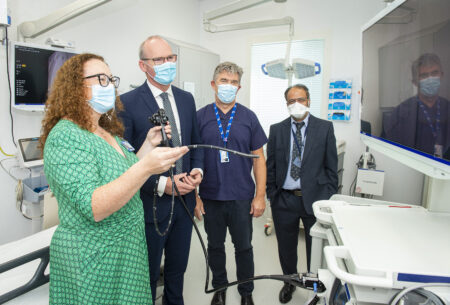 Harry Canning, Chief Executive at Bon Secours Hospital Cork, said: “The growth of our endoscopy services is just the latest in many significant developments that have enhanced the medical care Bon Secours Cork provides to our patients in recent years. Our endoscopy offering has undergone extensive renovation in accordance with Joint Advisory Group (JAG) guidelines, which is to ensure services are underpinned by the skills, resources and motivation necessary to provide high-quality, timely, patient-centred care. This further enhances what is already a state-of-the-art hospital that is fully equipped to offer patients in the region a range of best-practice, technologically-advanced services.”

In March of this year Bon Secours Health System announced a €300 million national investment in its services as part of a new strategy, “Resilience, Reliability and Readiness – The 2025 Plan”, which includes new capital projects, state-of-the-art equipment, IT infrastructure, and the creation of 450 new jobs across the country. In addition to new €10 million operating theatres opened in Cork in January, the hospital group is also in the process of developing a new 150-bed medical facility in Limerick City which will greatly expand services currently offered to patients in the mid-west. Bon Secours Tralee also plans to open a new €10 million Medical Assessment Unit and surgical day ward in 2024. A new €14 million surgical and oncology day ward will also open in Bon Secours Hospital Dublin in June next year.