County Cork **Mayor** Cllr **Barbara Murray** presented Down Syndrome **** Ireland**** with a cheque for €4,000, (Wednesday the 29th of August)* *the proceeds from “Big Bike Ride 2012”. This event, now in its third year, sees Cork County Council employees undertake a mammoth cycle to each of the local offices in ****Cork** **County****, covering up to 160km individually in one day.

Big Bike Ride 2012 is in partnership with Tour De Munster, and aims to raise as much funds as possible for Down Syndrome ****Ireland****, whose goal is to significantly improve the quality of life of people with Down syndrome, and make their futures as bright and independent as possible. BBR 2012 is also in partnership with council employee Catherine Sheridan’s * *English Channel** swim to raise funds for this fantastic cause. ****

Cork County Council has responsibility for the biggest county in the country with over an eighth of the country’s roads. The cyclists took leave but rather than forget all about work, they visited all the council offices where collections took place for Down Syndrome ****Ireland****. Local staff joined the cyclists on the way to shorten the 160km journey by giving them some company along the route. County Hall based staff also ensured that two stationary bikes were manned for the full work day.****

*Julie Doherty of Down Syndrome Cork says* *“Cork County Council staff have been very supportive of Down Syndrome Ireland with the Big Bike Ride having raised over €11,000 for DSI since 2010. These employees are well known for their generosity when it comes to charities, with staff taking part in various events every year. This year is no exception for which we are very grateful”* 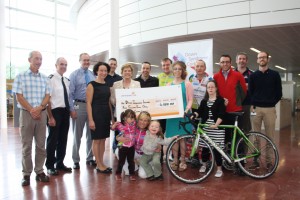