On Sunday the 30th of June, Cork City came alive with tweets and
chatter as World Social Media Day Cork burst onto our streets. This
FREE event was open to all – young or old. Teams from all over the
country registered in advance on the official world social media day
site, www.worldsocialmediaday.com

Margaret Smith, chief organiser of World Social Media Day Cork said,
“The event was a huge success with hundreds of people coming out to
support the event! The historic trail was a great success with the
hidden treasures; the streets of Cork have beat any museum hands down.
The wackiness of the Adventure trail caused both volunteers and
participants to cry tears of laughter. Everyone came back with huge
grins on their faces!”

To make sure there was something for everyone, the exciting event
featured two different trails; adventure and historic.

The adventure trail was an interactive trail that leads teams to many
of Cork’s wonderful venues with a series of wacky tasks to be
completed at each venue. The tasks required some creative genius, a
bit of physical strength, some amount of bravery and most of all a
great sense of humour! Each task had a little taster of Cork thrown
in.

The second trail which also had a historic twist was perfect for those
who preferred to have a relaxing Sunday stroll, to soak up some
atmosphere and see some new places. Three History buffs and Cork
experts took guided tours around to several historical spots around
Cork. There was a digital guide on the website also if people wanted
to go it alone and take it at their own pace.

At certain points, the path of both trails overlapped so nobody missed
out on all of the wonderful sites around the city. To add to the
excitement some Irish celebrities ‘popped up’ throughout the day in
various places along the trail. Rick O’Shea, Pat Shortt, Victor Barry,
Deirdre Shaughnessy, Pat Phelan and Sandra Murphy all took part in a
cardboard cut-out challenge where fantastic prizes were one from Nokia
Ireland, Barry’s Tea and more. Bishop Paul Colton took part in person
and opened up the Bishops Palace to the public for the day to meet and
greet loads of people who were delighted to meet him in person.

The World Social Media Day Cork party was not complete without an
after party at Electric. The hashtag #smdcork trended for over 24
hours in Ireland and was still going strong the following morning.
The volunteers for this event have worked tirelessly for over 6 months
to make this day happen and it is a credit to them that the event was
such a success.

There were 10 teams of 4 taking part in the Adventure trail and over
100 on the historic trail. There were also hundreds of people
watching the events spread around the city. There were 30 volunteers
from the Social Media Day Team and all the venues supplied their own
staff also. 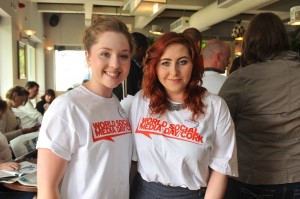