Not content with claims to be the ‘Real Capital’, an army of
rebellious Corkonians showed their true colours by embarking on a
‘Rebel Rising – Dublin Takeover’ on Tuesday 3rd September.

In anticipation for the upcoming Cork Rebel Week, which takes place
from October 14th – 20th, the Cork Rebel Patrol Squad hit the streets
to paint the town red (and white of course), and spread the word about
what is set to be one of Ireland’s flagship Gathering events.

The public looked on as the Patrol Squad, dressed in red and white
camouflage uniforms got down to business, draping Cork flags over a
number of bridges on the River Liffey, and on iconic statues like Phil
Lynott and Molly Malone, before making their way to Moore Street to
see if they could make their way on to the set of Brendan O’Carroll’s
“Mrs. Brown’s Boys”, which was being filmed on the famous Dublin
street.

Cork’s beloved singer/ songwriter, John Spillane, who became the first
Corkonian to be presented with an official Rebel Passport earlier this
year, joined the rebellion and turned quite a few heads as he busked
on Grafton Street, proudly sporting ‘Rebels Abú’ on his t-shirt; and
joining some Moore Street traders for an impromptu sing song!

The ‘invasion’ then moved to Louis Copeland’s famous retail outlet on
Capel Street, where the master tailor was measured up for his very own
Cork jersey ahead of this weekend’s big match. A special Cork city
sightseeing, open-top tour bus later brought the Rebel Patrol Squad to
famous Dublin landmarks including the GPO and Croke Park.

Lord Mayor of Cork, Cllr. Catherine Clancy, and Cork County Mayor,
Cllr. Noel O’Connor teamed up for an ‘invasion’ of the Mansion House,
where they were welcomed by Deputy Lord Mayor of Dublin, Cllr. Henry
Upton.

Cork hero and world champion race walker, Robert Heffernan joined in
the fun, and embarked on another “testing” walk, as he made the
journey, as a proud Corkonian joined by fellow Cork men and women,
from Grafton Street to the Dublin Docklands for a very special VIP
reception.

The ‘Rebel Rising – Dublin Takeover’ culminated with a VIP reception
at the Dublin Docklands aboard battleship, the LÉ EMER, on her final
mission before being decommissioned. Cork checkpoints and passport
patrols granted access to the Irish Naval Service’s oldest vessel,
ensuring only true Corkonians joined this important mission.

Aboard the LÉ EMER, the programme of events for the hugely anticipated
Cork Rebel Week was announced. Details of the seven-day festival,
supported by Cork City and County Councils, which celebrates Cork’s
rich heritage and strong identity, and has been capturing the
imagination of Corkonians living locally, nationally and
internationally were unveiled to VIP guests.

Details of a massive International Cork Gathering event taking place
Saturday 19th October, which includes an open-air concert in the Port
of Cork headlined by latest chart sensations, Seo Linn; as well as an
international Marching Band Parade starting on Patrick’s Hill, were
among the exciting events divulged at the VIP reception.

Speaking at the event, Cork Rebel Week organiser, Padraic O’Kane said:
“I’m proud to say the ‘Rebel Rising – Dublin Takeover’ has been a
tremendous success. Our Rebel Patrol Squad infiltrated the capital and
successfully spread the word about Ireland’s most exciting Gathering
event, Cork Rebel Week which takes place from October 14th – 20th. We
were delighted that the LÉ EMER’s final mission was such an important
one!”

Full details on the schedule of events for October 14th – 20th and
more information on Cork Rebel Week are available
fromwww.corkrebelweek2013.com. 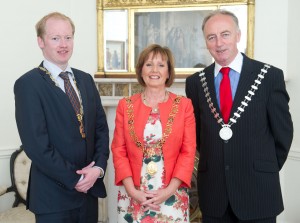