Sinn Féin has selected Liadh Ní Riada as the party’s candidate to
contest the European Election in the south of the country next year.
Members from across Munster packed into The Cahir House Hotel, Co.
Tipperary to decide between Ms. Ní Riada and Cllr. Chris O’Leary.

Following speeches from both candidates , approximately 320 members
cast their votes and it was Ni Riada who won out by a very tight
margin.

Ni Riada from the Muskerry Gaeltacht in Co.Cork,the daughter of famed
composer Sean Ó Riada, will now contest next year’s European
Parliament elections for the party in the constituency of Ireland
South, which is expected to include most of Munster and part of South
Leinster.

““ I think today is a great day for Irish women in politics because we
don’t have enough good women in politics, and the women of this
country need to have a voice and need to be heard and a space needs to
be created for all women to speak up,” she said.

“As a party we are totally anti-austerity and I will be campaigning
for job creation and an end to emigration – child poverty is on the
increase and that’s a huge issue for me, and rural regeneration is
also important for me because so many young people in my own community
have emigrated.

“I joined Sinn Féin two years ago – I think Sinn Féin offer the only
real choice for people. We are a socialist party and we relate to the
working class people out there who are struggling every day of the
week – and we are the only party offering the people a real
alternative,” she said.

“This is my first time running for public office and the campaign
starts from today – I will continue in my role as Sinn Féin national
Gaeilge officer – our language and culture is a huge part of who we
are, it’s our identity and that has to be on the agenda.”

“It is a big ask but a great honour to represent this party, given
where we are, and given our potential for the future.” 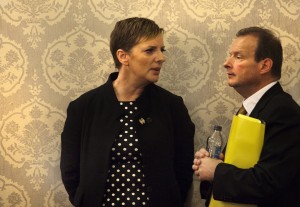