Jockey Davy Russell and Trainer Jim Culloty were named Cork Persons of the
Month to mark their recent Cheltenham Gold Cup win. Their names now also go
forward for possible selection as Cork Persons of Year at an awards lunch
at years end in Cork.

Davy Russell from Youghal, triumphed on 20 – 1 shot, Lord Windermere, who
was trained by Jim Culloty at his North Cork stables.

“Winning the Gold Cup is something every jockey dreams about” said a
delighted Davy Russell.

Jim Culloty, the trainer of Lord Windermere, becomes only the fourth man to
both train and ride a Gold Cup winner and this most recent win was the
first Irish success in eight years. A homecoming parade was held at Jim’s
Mount Corbitt Stables in Churchtown, Co. Cork. Jim also won the Aintree
Grand National as a jockey, back in 2002.

Jim Culloty and Davy Russell now become part of Cheltenham folklore, after
their involvement in one of the most dramatic Gold Cup races ever. 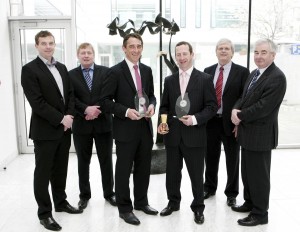