Developing new routes to Germany, Scandinavia, Northern Italy and
France was the focus of a round table conference at Inchydoney on
Thursday with the Minister for tourism Paschal
Donohue among those in attendance. The event which was attended by the
management at Cork Airport as well as representatives of Failte
Ireland, Tourism Ireland, the Irish Hotels Federation, Cork County
Council and the Airport Development Authority discussed ways of better
coordinating the marketing of West Cork to encourage airlines to
develop new routes in to the Airport.

The organiser and Chair of the event West Cork based Jim Daly TD
expressed his hopes for further good news to come from Cork Airport
resulting from the discussions at today’s conference. “I believe that
the future success of Cork Airport is not related to any issues
surrounding the debt or the old terminal but rather will come about by
increased cooperation and focus by the agencies tasked with marketing
Cork to the wider European market” stated Jim Daly who went on to
outline the rationale for today’s meeting and what resulted from the
conference. “The objective of today’s event was to identify a more
cohesive approach from all stakeholders in selling the West Cork
tourism product and to return back to the table in 3 months time to
review the progress made by all parties responsible for promoting
Cork.

The Minister has confirmed that he will return to West Cork before the
end of the year to be appraised of the success of this approach to
better coordinating the marketing of the area which by then will
hopefully resulted in new routes being serviced from Cork Airport”
concluded Jim Daly. 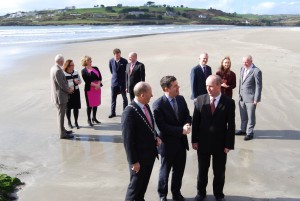