Do you remember RTÉ Radio Cork? It was also known as Cork Local Radio and Cork 89FM.

It closed in the year 2000, and while that seems recent it was a time before the internet was in common use, so there isn’t much information about the station online.

Signal
RTÉ Radio Cork was broadcast on 89.1FM from Cork City. The signal spilled into the suburbs of Carrigaline to the South, and Ballincollig to the West, but listeners further afield in County Cork had to tune in on the lower quality medium wave signal on 729MW. Again, this was an era before web streaming.

RTÉ Radio Cork was an opt-out station, meaning it mostly re-broadcast the RTE Radio 1 signal from Dublin. Then, at certain times, Cork content was broadcast by local presenters.

The Cork studio was located on Union Quay, where the School of Music now stands. The building in the photograph below will be familiar to many Corconians, some of whom used to park for free in the carpark to the left in recent years. 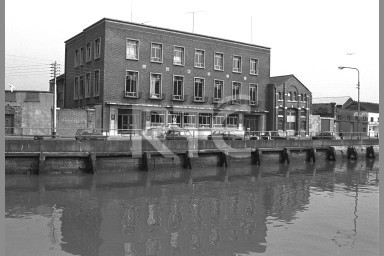 RTÉ Cork is now based on Father Matthew Street.

Listen back
I recently discovered an old cassette tape of RTÉ Radio Cork buried in a drawer. It’s an outside broadcast from 1994, and includes dated gems such as a reference to Willie Nelson performing in Greenglens Arena, Millstreet, Co Cork. Surprisingly after 21 years the BASF brand cassette still played.

In the outside broadcast Presenter Stevie Bolger was in O’Donovan’s Hotel (still in existence), Clonakilty, West Cork for around an hour.

Flor McCarthy reads the News bulletin, where the stories are:

Pat McAuliffe (still works for RTÉ) then reads the Sport bulletin which covers:

Programmes
RTÉ Radio Cork provided a valuable local radio service. One of its programmes was so popular that it’s still remembered today some 15 years after that station closed. Under the Goldie Fish was a radio drama which. Sadly, there is no audio available online.

Radio landscape has changed since RTÉ Radio Cork closed
Today, in 2015, things have changed. In relation to Radio; the Broadcasting Authority of Ireland says there are 34 commercial radio stations nationwide. Three are in Cork: RedFM, 96FM, and C103.

Do you remember RTÉ Radio Cork?
Share your thoughts in the comments section below.