There are so many styles of music, I can currently hear two… competing.

Thanks to the wonders of technology as I type this I am on Winthrop Street in Cork City. It’s a pedestrianised zone where entertainers of all kinds demonstrate their talents – or lack thereof – daily.

Street music in Cork City is quite democratic. In practice no licence is required. If the public approve of the tones they will donate a few coins, and if they don’t then then the artist will receive the message that they need to hone their skills.

But this is the street, and quality is hit and miss…


Above: in the morning Winthrop Street, Cork City is quiet. During the daytime however, it’s vibrant.

…there are plenty of performers who are most certainly professional at their craft.

The traditional Irish music, singing, and dance show, ‘Pulses of Tradition’, makes a return this year. Taking place at Triskel Christchurch every Thursday and Friday night until mid-September. 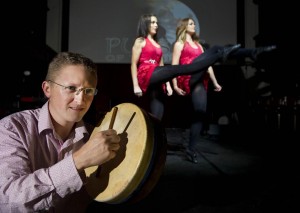 Brian Morrissy with Debbie O’Brien and Emma Foolkes, members of the cast of Pulses of Tradition 2015

The show is truly authentic and engaging and offers an intriguing insight into what Irish culture is all about.  It features some of Ireland’s best loved traditional musicians and (world) champion Irish Dancers Andrew Vickers, Tereza Bernardova and Ciara Callanan-Ryan, along with singing sensation Elaine Cormican.

This show has been described as “a high energy, engaging show in an intimate setting. Excellent Irish dancing & music. A must see if you’re in Cork!”

It has jigs and reels, soft shoe and hard shoe dancing, ballads and sean-nós singing. The show features a number of unexpected treats for the audience such as some of the cast facing off in an amazing vocal and instrument percussion duel.

Pulses of Tradition, which is now in its 4th year, is a no. 1 attraction on Trip Advisor in Cork and has entertained many thousands of visitors and locals in Cork since 2012.  It was created and produced by the talented Brian Morrissey, staged by Corcadorca’s Pat Kiernan and commissioned by Cork City Council.

The show has also toured to France and Scotland, and begins a tour of China when its summer run end in Cork. It has achieved countless standing ovations and glowing reviews; ‘This is the best traditional music show we’ve ever seen’, ‘Pulsating, exciting and a must see in Cork City’, ‘Multi-talented, genuine, original and fun’ and ‘It makes trad current and exciting’.

The show will run from June 4th to September 11th.

Alcohol is good (for economy) says industry
Previous Post
Coca Cola Ireland to give €125,000 to charity