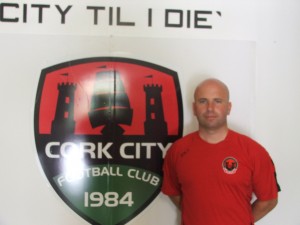 The club are excited to have secured the services of one of the country’s top young managers Niall O’Regan comes to the club with a proven track record in both the female and male game and just recently guided the Cork Schoolboys League under 16’s to back to back All-Ireland titles, while he was also coached Douglas Hall’s winning Women’s National Cup side in 2013.

Niall O’Regan said: “As a group of coaching professionals we are looking to bring Cork City Women’s to the top of the women’s game in Ireland, which will show the strength of the whole of the women’s game in Cork. To do this we will need everyone involved in women’s football in Cork to back us, support us, believe in us and work with us.That means players, local clubs, coaches and committees, all of us are involved in football to develop players and the best reward for this for me is to see players you have worked with playing at the highest level. I have had the pleasure of this with the likes of Alan Browne at Preston, Eric Grimes at Leeds and John Kavanagh with Cork City and I hope when coaches see players who they have coached doing well for us that they will get that same satisfaction.”

As part of his management team – Niall will be assisted by head coach Richard Holland with coaches Kieran Dunlea and Ivan Bevan. Dave Bell will also be assisting with coaching through his University College Cork programme. Niall was pleased to bring his team with him to the club and knows they will be of huge assistance throughout the season, “My management team will be made up of very experienced, qualified and successful coaches that will all be hungry for success and all I can say is to every girl that wants to make history in the women’s game is that now is the time to step up and put yourself forward to play for this fabulous club and help us compete with the best in the country. I’m delighted that Dave Bell will also be a part of my coaching staff. Dave has had huge success coaching the Irish under 17 and 19 teams in recent years and will bring a wealth of experience and knowledge to the club.”

Chairperson Chris O’Mahony welcomed the appointment of O’Regan and his backroom staff.
“We are really pleased that Niall has decided to join the club, he has already had plenty of success despite being a young manager and we are confident he will continue this success with us. It is also pleasing to have Richard Holland, Kieran Dunlea and Ivan Bevan, who were part of Niall’s coaching staff with the Cork Under 16’s will be joining us at Cork City Women’s. We are determined to build a successful women’s football club with a long-term vision, strong links in the community and a commitment to youth development and Niall’s appointment is another big step towards achieving this,” said O’Mahony.

The Leesiders will also be running an open training session this Saturday at 10am in Bishopstown. Any player who is interested in playing football in the Women’s National League is urged to attend to get to know the management team and the requirements for competing in the National League. Commenting on this, Niall said “I’m looking forward to meeting last season’s squad and the new players who will be there.”

As part of the restructuring of the club for the upcoming season, last season’s manager Charlie Lynch will be taking on a Youth Development role within the club primarily to run and expand the club Academy during the next season. The club made excellent strides with the U18 academy last season and hopes to further develop the game in Cork through the venture for the upcoming year.

Cork City also have a number of camps upcoming with a camp running from July 20th – 22nd in conjunction with Cork Institute of Technology and taking place on their grounds first before two camps that take place in August – with the first camp taking place in Riverstown on August 10th-12th before a following camp in Watergrasshill on August 17th – 19th. Each camp costs €35, but there is a special offer running to allow attendees go to both camps in August for a fee of€60. More details on all three camps can be found on the clubs website.